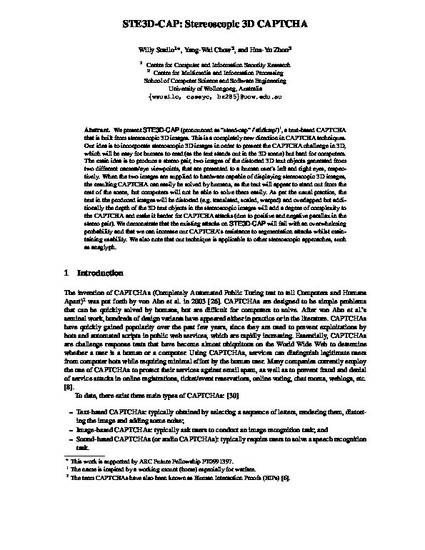 We present STE3D-CAP (pronounced as “steed-cap” /'stidkæp/), a text-based CAPTCHA that is built from stereoscopic 3D images. This is a completely new direction in CAPTCHA techniques. Our idea is to incorporate stereoscopic 3D images in order to present the CAPTCHA challenge in 3D, which will be easy for humans to read (as the text stands out in the 3D scene) but hard for computers. The main idea is to produce a stereo pair, two images of the distorted 3D text objects generated from two different camera/eye viewpoints, that are presented to a human user’s left and right eyes, respectively. When the two images are supplied to hardware capable of displaying stereoscopic 3D images, the resulting CAPTCHA can easily be solved by humans, as the text will appear to stand out from the rest of the scene, but computers will not be able to solve them easily. As per the usual practice, the text in the produced images will be distorted (e.g. translated, scaled, warped) and overlapped but additionally the depth of the 3D text objects in the stereoscopic images will add a degree of complexity to the CAPTCHA and make it harder for CAPTCHA attacks (due to positive and negative parallax in the stereo pair). We demonstrate that the existing attacks on STE3D-CAP will fail with an overwhelming probability and that we can increase our CAPTCHA’s resistance to segmentation attacks whilst maintaining usability. We also note that our technique is applicable to other stereoscopic approaches, such as anaglyph.