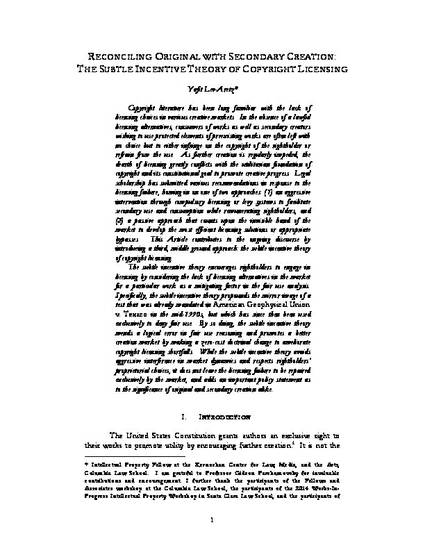 Copyright literature has been long familiar with the lack of licensing choices in various creative markets. In the absence of a lawful licensing alternatives, consumers of works as well as secondary creators wishing to use protected elements of preexisting works are often left with no choice but to either infringe on the copyright of the rightholder or refrain from the use. As further creation is regularly impeded, the dearth of licensing greatly conflicts with the utilitarian foundation of copyright and its constitutional goal to promote creative progress. Legal scholarship has submitted various recommendations in response to the licensing failure, homing in on one of two approaches: (1) an aggressive intervention through compulsory licensing or levy systems to facilitate secondary use and consumption while remunerating rightholders, and (2) a passive approach that counts upon the invisible hand of the market to develop the most efficient licensing solutions or appropriate bypasses. This Article contributes to the ongoing discourse by introducing a third, middle ground approach: the subtle incentive theory of copyright licensing.