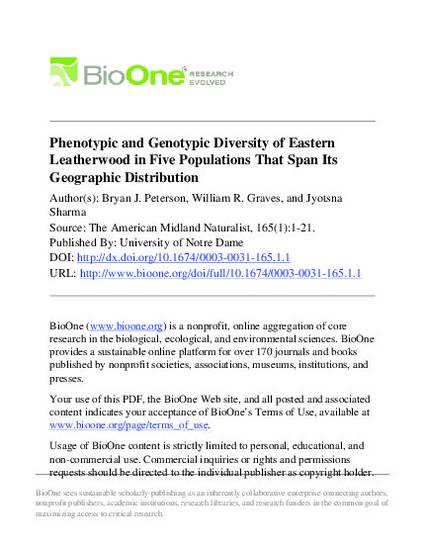 Article
Phenotypic and Genotypic Diversity of Eastern Leatherwood in Five Populations That Span Its Geographic Distribution
The American Midland Naturalist
Download Find in your library
Document Type
Article
Disciplines
Publication Version
Published Version
Publication Date
DOI
10.1674/0003-0031-165.1.1
Abstract
Knowledge of variation among populations is important for making decisions about conservation of rare, threatened or endangered taxa. We investigated variation within and among five populations ofDirca palustris L. an understory shrub with a sporadic distribution and life-history traits that led us to predict strong phenotypic and genetic differentiation characteristic of historically limited gene flow. Populations sampled in Florida, Alabama, Illinois, Wisconsin and North Dakota spanned the geographic distribution of the species. Phenotypic traits differed among populations, and many traits correlated with latitude and environmental characteristics of the five sites. Principal components (PC) analysis showed that the first three PCs explained only 43% of the total phenotypic variation, and neighbor-joining analysis showed phenotypic overlap among individual plants across the five populations. The most phenotypically distinct populations were in Florida (unique in the color of pubescence on bud scales) and North Dakota (unique in a number of floral and vegetative traits). We found genetic differentiation among populations based on PC and neighbor-joining analysis of ISSR data and plants reliably clustered by population of origin. Fifty-four percent of the total genetic variation was among populations, and a Mantel test of both phenotypic and genetic data showed isolation-by-distance, which is indicative of historically limited gene flow. Both allelic richness and the number of private loci for each population decreased with increasing latitude, suggesting founder effects, genetic bottlenecks or genetic drift during the postglacial re-colonization of D. palustris into higher latitudes. The populations in North Dakota and Florida, which are imperiled at the northern and southern range limits of D. palustris, have the most unique phenotypes and genotypes and should represent priorities for conservation.
Comments