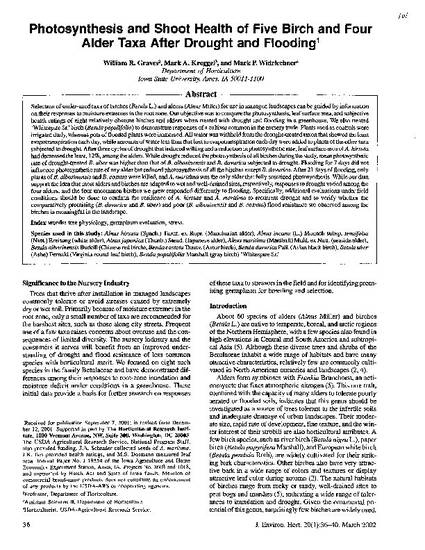 Article
Photosynthesis and Shoot Health of Five Birch and Four Alder Taxa After Drought and Flooding
Journal of Environmental Horticulture
Download Find in your library
Document Type
Article
Disciplines
Publication Version
Published Version
Publication Date
Abstract
Selection of under-used taxa of birches (Betula L.) and alders (Alnus Miller) for use in managed landscapes can be guided by information on their responses to moisture extremes in the root zone. Our objective was to compare the photosynthesis, leaf surface area, and subjective health ratings of eight relatively obscure birches and alders when treated with drought and flooding in a greenhouse. We also treated ‘Whitespire Sr.’ birch (Betula populifolia) to demonstrate responses of a cultivar common in the nursery trade. Plants used as controls were irrigated daily, whereas pots of flooded plants were immersed. All water was withheld from the drought-treated taxon that showed the least evapotranspiration each day, while amounts of water less than that lost to evapotranspiration each day were added to plants of the other taxa subjected to drought. After three cycles of drought that induced wilting and a reduction in photosynthetic rate, leaf surface area of A. hirsuta had decreased the least, 12%, among the alders. While drought reduced the photosynthesis of all birches during the study, mean photosynthetic rate of drought-treated B. uber was higher than that of B. albosinensis and B. davurica subjected to drought. Flooding for 7 days did not influence photosynthetic rate of any alder but reduced photosynthesis of all the birches except B. davurica. After 21 days of flooding, only plants of B. albosinensis and B. costata were killed, and A. maritima was the only alder that fully sustained photosynthesis. While our data support the idea that most alders and birches are adapted to wet and well-drained sites, respectively, responses to drought varied among the four alders, and the four uncommon birches we grew responded differently to flooding. Specifically, additional evaluations under field conditions should be done to confirm the resilience of A. hirsuta and A. maritima to recurrent drought and to verify whether the comparatively promising (B. davurica and B. uber) and poor (B. albosinensis and B. costata) flood resistance we observed among the birches is meaningful in the landscape.
Comments

Rights
Works produced by employees of the U.S. Government as part of their official duties are not copyrighted within the U.S. The content of this document is not copyrighted.
Language
en
File Format
application/pdf
Citation Information
William R. Graves, Mark A. Kroggel and Mark P. Widrlechner. "Photosynthesis and Shoot Health of Five Birch and Four Alder Taxa After Drought and Flooding" Journal of Environmental Horticulture Vol. 20 Iss. 1 (2002) p. 36 - 40
Available at: http://works.bepress.com/william_graves/17/