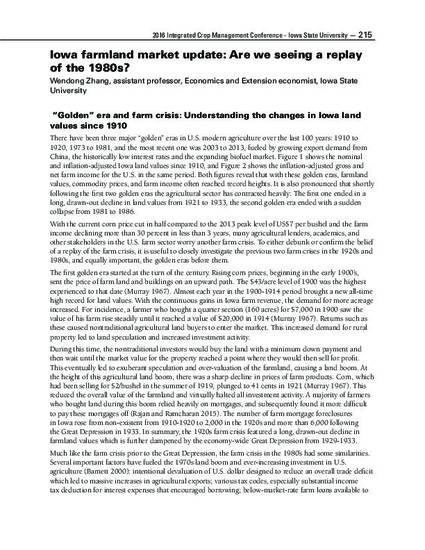 There have been three major “golden” eras in U.S. modern agriculture over the last 100 years: 1910 to 1920, 1973 to 1981, and the most recent one was 2003 to 2013, fueled by growing export demand from China, the historically low interest rates and the expanding biofuel market. Figure 1 shows the nominal and inflation-adjusted Iowa land values since 1910, and Figure 2 shows the inflation-adjusted gross and net farm income for the U.S. in the same period. Both figures reveal that with these golden eras, farmland values, commodity prices, and farm income often reached record heights. It is also pronounced that shortly following the first two golden eras the agricultural sector has contracted heavily: The first one ended in a long, drawn out decline in land values from 1921 to 1933, the second golden era ended with a sudden collapse from 1981 to 1986.