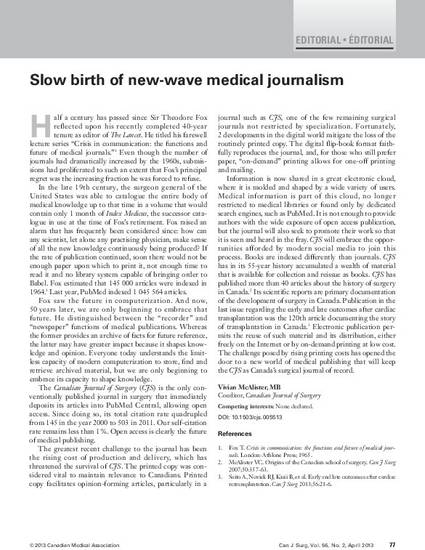 Half a century has passed since Sir Theodore Fox reflected upon his recently completed 40-year tenure as editor of The Lancet. He titled his farewell lecture series “Crisis in communication: the functions and future of medical journals.”1 Even though the number of journals had dramatically increased by the 1960s, submissions had proliferated to such an extent that Fox’s principal regret was the increasing fraction he was forced to refuse. In the late 19th century, the surgeon general of the United States was able to catalogue the entire body of medical knowledge up to that time in a volume that would contain only 1 month of Index Medicus, the successor catalogue in use at the time of Fox’s retirement. Fox raised an alarm that has frequently been considered since: how can any scientist, let alone any practising physician, make sense of all the new knowledge continuously being produced? If the rate of publication continued, soon there would not be enough paper upon which to print it, not enough time to read it and no library system capable of bringing order to Babel. Fox estimated that 145 000 articles were indexed in 1964.1 Last year, PubMed indexed 1 045 564 articles.