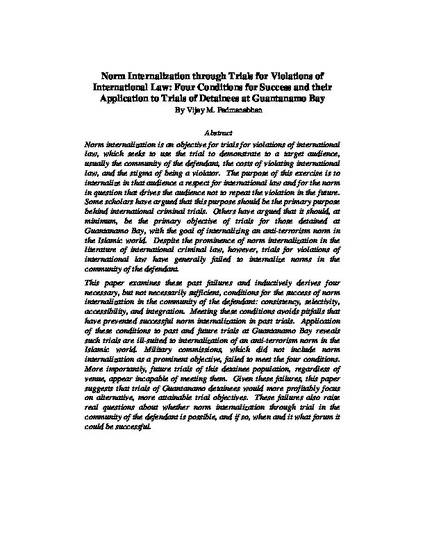 Unpublished Paper
Norm Internalization through Trials for Violations of International Law: Four Conditions for Success and their Application to Trials of Detainees at Guantanamo Bay
ExpressO (2009)
Download
Abstract

This paper examines these past failures and inductively derives four necessary, but not necessarily sufficient, conditions for the success of norm internalization in the community of the defendant: consistency, selectivity, accessibility, and integration. Meeting these conditions avoids pitfalls that have prevented successful norm internalization in past trials. Application of these conditions to past and future trials at Guantanamo Bay reveals such trials are ill-suited to internalization of an anti-terrorism norm in the Islamic world. Military commissions, which did not include norm internalization as a prominent objective, failed to meet the four conditions. More importantly, future trials of this detainee population, regardless of venue, appear incapable of meeting them. Given these failures, this paper suggests that trials of Guantanamo detainees would more profitably focus on alternative, more attainable trial objectives. These failures also raise real questions about whether norm internalization through trial in the community of the defendant is possible, and if so, when and it what forum it could be successful.