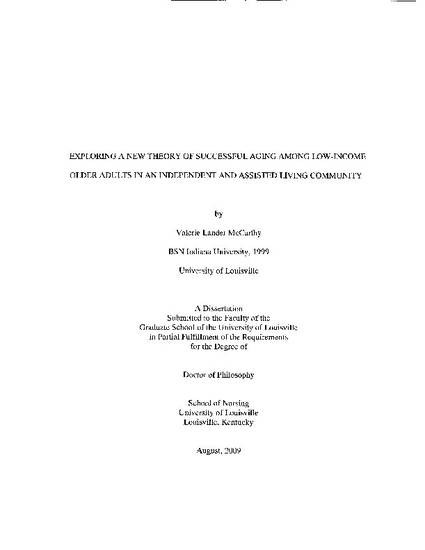 BACKGROUND: Current successful aging theory excludes individuals with disease or disability, limits the potential for successful aging in minority and lower socioeconomic populations, focuses on behavioral determinants of health rather than social and environmental determinants, and fails to consider older adults' own criteria for successful aging. A recent mid-range nursing theory (Flood, 2005) proposed that two factors - adaptation and gerotranscendence - are primary contributors to a new view of successful aging that may address these problems. PURPOSE: The goal of the study was to investigate relationships among adaptation, transcendence, and successful aging to explore the potential of Flood's (2005) theory to serve as a guide to nursing research, practice, and policy. METHODS: A cross-sectional survey study was conducted among a stratified, random sample (N= 112) of non-demented older adults living independently or receiving assisted living services in an urban low-income continuing care retirement community. Investigator administered surveys were conducted with small groups (n= 5 to 7). Recruitment minimized the number of surveys subsequently excluded due to dementia (6.4%). Data collection, including consent, dementia screening, and administration of surveys was completed in a single session, while preserving participants' privacy and dignity. Efforts were made to accommodate sensory or literacy limitations. RESULTS: The study found significant support for Flood's (2005) theory of successful aging. Adaptation and transcendence explained 45.4% of the variance in successful aging, controlling for age, income, function, and health. Transcendence accounted for two-and-a-half times the effect of adaptation. Ninety-two percent of participants reported they were aging successfully, regardless of age, health, function, income, or objective measures of successful aging. The study also supported the use of the newly developed Successful Aging Inventory (Flood, 2008) as an outcome measure to capture the new definition of successful aging (alpha .82). CONCLUSIONS: Flood's theory of successful aging appears to merit further study of its potential to address the needs of older adults with disease, disability or socioeconomic disadvantages. Transcendence may be an important contributor to a holistic, positive view of aging that has not been previously reported in the successful aging literature.