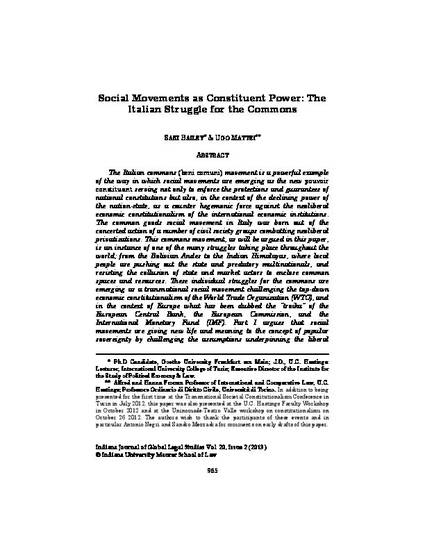 The Italian commons (beni comuni) movement is a powerful example of the way in which social movements are emerging as the new pouvoir constituant serving not only to enforce the protections and guarantees of national constitutions but also, in the context of the declining power of the nation-state, as a counter hegemonic force against the neoliberal economic constitutionalism of the international economic institutions. The common goods social movement in Italy was born out of the concerted action of a number of civil society groups combatting neoliberal privatizations. This commons movement, as will be argued in this paper, is an instance of one of the many struggles taking place throughout the world; from the Bolivian Andes to the Indian Himalayas, where local people are pushing out the state and predatory multinationals, and resisting the collusion of state and market actors to enclose common spaces and resources. These individual struggles for the commons are emerging as a transnational social movement challenging the top-down economic constitutionalism of the World Trade Organization (WTO), and in the context of Europe what has been dubbed the “troika” of the European Central Bank, the European Commission, and the International Monetary Fund (IMF). Part I argues that social movements are giving new life and meaning to the concept of popular sovereignty by challenging the assumptions underpinning the liberal constitutional form, namely of private property, and providing a much needed channel for political confrontation where parliamentary politics has failed to protect the public from predatory private actors. Part II offers a participant observation exploring the national constituent role played by the beni comuni social movement in upholding the protections and guarantees of the Italian Constitution. Finally, Part III attempts to describe the global commons movement as engaged in a form of bottom-up constitutionalism an emerging form of pouvoir constituant in a supranational constituent process of reclaiming commons from predatory multinational actors through bottom-up societal constitutionalism.