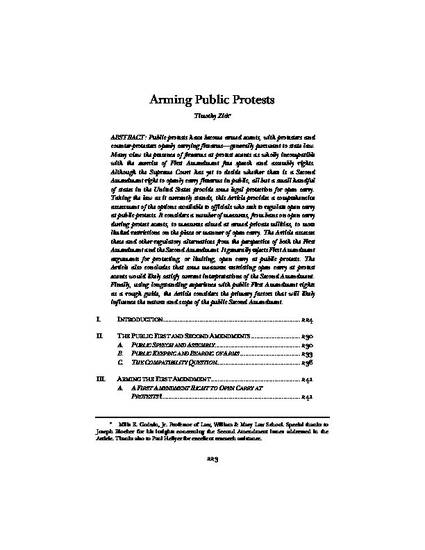 Public protests have become armed events, with protesters and counter-protesters openly carrying firearms—generally pursuant to state law. Many view the presence of firearms at protest events as wholly incompatible with the exercise of First Amendment free speech and assembly rights. Although the Supreme Court has yet to decide whether there is a Second Amendment right to openly carry firearms in public, all but a small handful of states in the United States provide some legal protection for open carry. Taking the law as it currently stands, this Article provides a comprehensive assessment of the options available to officials who seek to regulate open carry at public protests. It considers a number of measures, from bans on open carry during protest events, to measures aimed at armed private militias, to more limited restrictions on the place or manner of open carry. The Article assesses these and other regulatory alternatives from the perspective of both the First Amendment and the Second Amendment. It generally rejects First Amendment arguments for protecting, or limiting, open carry at public protests. The Article also concludes that some measures restricting open carry at protest events would likely satisfy current interpretations of the Second Amendment. Finally, using longstanding experience with public First Amendment rights as a rough guide, the Article considers the primary factors that will likely influence the nature and scope of the public Second Amendment.