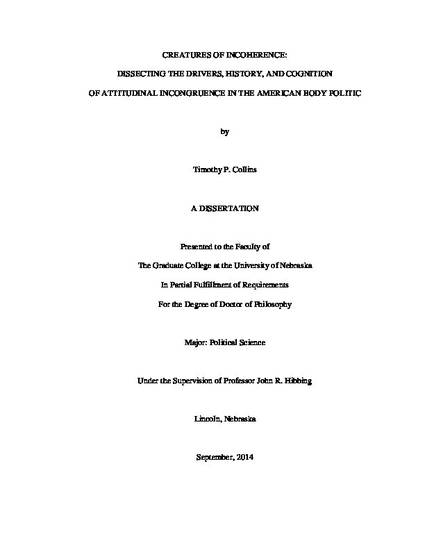 Other
Creatures of Incoherence: Dissecting the Drivers, History, and Cognition of Attitudinal Incongruence in the American Body Politic
(2014)
Download
Abstract

Most American conservatives and liberals wield contradictory political attitudes. This dissertation explores what drives this “attitudinal incongruence.” First, I define and operationalize my terminology and situate the topic within social and political psychology to formulate my central model and theory of ideologically asymmetrical application of (1) individuals’ psychological and cognitive traits, and (2) individuals’ social identity and environmental traits. This leads to the overarching hypothesis that conservatives’ incongruities are more strongly driven by internal forces, and liberals’ by external forces. The central model is then demonstrated in a broad historical overview of attitudinal incongruence in America. The central tenets of my theory are upheld in subsequent quantitative analyses of psychological, cognitive, and biological traits of subjects, but not in a cognitive dissonance experiment—albeit nevertheless demonstrating that psychological traits are likely the strongest drivers of incongruence overall. I eventually conclude that, although in strictly objective terms, liberals tend to be more attitudinally congruent than conservatives, for more “external” reasons, this fact—a common political attack—is not itself a normative negative, but a necessary and positive function of ideologies’ belief systems operating within the structures of the American political system.

A DISSERTATION Presented to the Faculty of The Graduate College at the University of Nebraska In Partial Fulfillment of Requirements For the Degree of Doctor of Philosophy, Major: Political Science, Under the Supervision of Professor John R. Hibbing. Lincoln, Nebraska: September, 2014