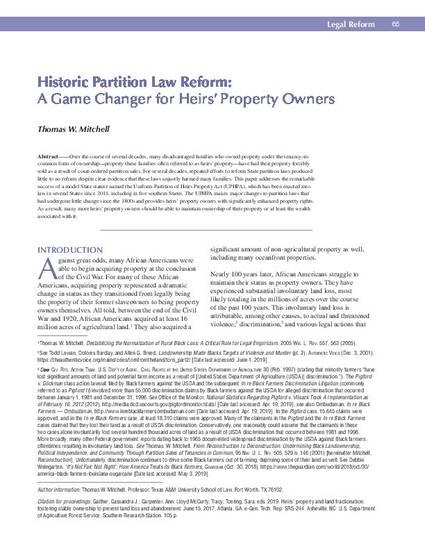 Over the course of several decades, many disadvantaged families who owned property under the tenancy-in-common form of ownership—property these families often referred to as heirs’ property—have had their property forcibly sold as a result of court-ordered partition sales. For several decades, repeated efforts to reform State partition laws produced little to no reform despite clear evidence that these laws unjustly harmed many families. This paper addresses the remarkable success of a model State statute named the Uniform Partition of Heirs Property Act (UPHPA), which has been enacted into law in several States since 2011, including in five southern States. The UPHPA makes major changes to partition laws that had undergone little change since the 1800s and provides heirs’ property owners with significantly enhanced property rights. As a result, many more heirs’ property owners should be able to maintain ownership of their property or at least the wealth associated with it.