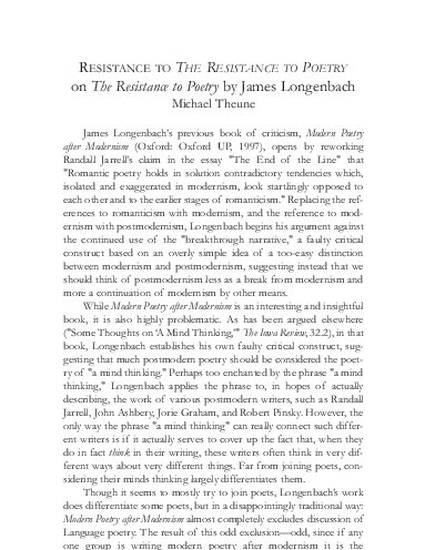 James Longenbach’s previous book of criticism, Modern Poetry after Modernism (Oxford: Oxford UP, 1997), opens by reworking Randall Jarrell’s claim in the essay "The End of the Line" that "Romantic poetry holds in solution contradictory tendencies which, isolated and exaggerated in modernism, look startlingly opposed to each other and to the earlier stages of romanticism." Replacing the references to romanticism with modernism, and the reference to modernism with postmodernism, Longenbach begins his argument against the continued use of the "breakthrough narrative," a faulty critical construct based on an overly simple idea of a too-easy distinction between modernism and postmodernism, suggesting instead that we should think of postmodernism less as a break from modernism and more a continuation of modernism by other means.

Originally published in Pleiades: A Journal of New Writing and used with permission.

Disciplines
Publication Date
Citation Information
Michael Theune. "Resistance to The Resistance To Poetry on The Resistance to Poetry" Pleiades: A Journal of New Writing, volume 25, issue 1, pgs. 120-29. (2005)
Available at: http://works.bepress.com/theune/9/