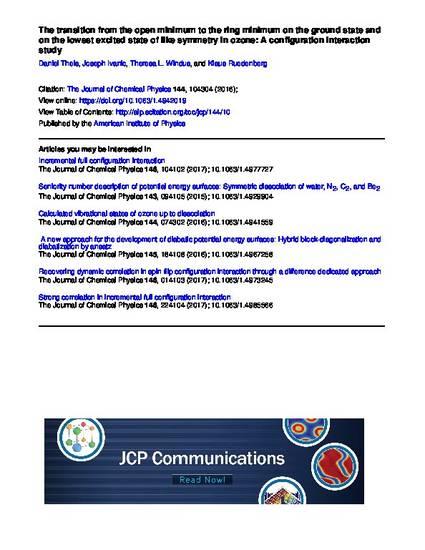 Article
The transition from the open minimum to the ring minimum on the ground state and on the lowest excited state of like symmetry in ozone: A configuration interaction study
The Journal of Chemical Physics
Download Find in your library
Document Type
Article
Disciplines
Publication Version
Published Version
Publication Date
DOI
10.1063/1.4942019
Abstract

The metastable ring structure of the ozone 11A1 ground state, which theoretical calculations have shown to exist, has so far eluded experimental detection. An accurate prediction for the energy difference between this isomer and the lower open structure is therefore of interest, as is a prediction for the isomerization barrier between them, which results from interactions between the lowest two 1A1 states. In the present work, valence correlated energies of the 11A1 state and the 21A1 state were calculated at the 11A1 open minimum, the 11A1 ring minimum, the transition state between these two minima, the minimum of the 21A1 state, and the conical intersection between the two states. The geometries were determined at the full-valence multi-configuration self-consistent-field level. Configuration interaction (CI) expansions up to quadruple excitations were calculated with triple-zeta atomic basis sets. The CI expansions based on eight different reference configuration spaces were explored. To obtain some of the quadruple excitation energies, the method of Correlation Energy Extrapolation by Intrinsic Scaling was generalized to the simultaneous extrapolation for two states. This extrapolation method was shown to be very accurate. On the other hand, none of the CI expansions were found to have converged to millihartree (mh) accuracy at the quadruple excitation level. The data suggest that convergence to mh accuracy is probably attained at the sextuple excitation level. On the 11A1 state, the present calculations yield the estimates of (ring minimum—open minimum) ∼45–50 mh and (transition state—open minimum) ∼85–90 mh. For the (21A1–1A1) excitation energy, the estimate of ∼130–170 mh is found at the open minimum and 270–310 mh at the ring minimum. At the transition state, the difference (21A1–1A1) is found to be between 1 and 10 mh. The geometry of the transition state on the 11A1 surface and that of the minimum on the 21A1 surface nearly coincide. More accurate predictions of the energydifferences also require CI expansions to at least sextuple excitations with respect to the valence space. For every wave function considered, the omission of the correlations of the 2s oxygen orbitals, which is a widely used approximation, was found to cause errors of about ±10 mh with respect to theenergy differences.

This article is published as Theis, Daniel, Joseph Ivanic, Theresa L. Windus, and Klaus Ruedenberg. "The transition from the open minimum to the ring minimum on the ground state and on the lowest excited state of like symmetry in ozone: A configuration interaction study." The Journal of chemical physics 144, no. 10 (2016): 104304. 10.1063/1.4942019. Posted with permission.