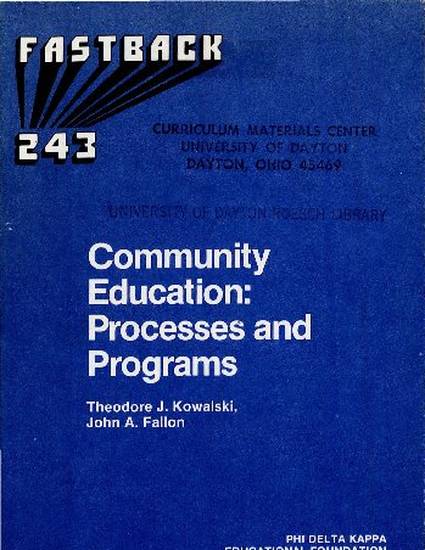 "Community education is on the threshold of a major breakthrough. It has captured the imagination of both educational and lay leaders throughout the U.S."

Although these words are an appropriate description of community education today, they were written by V. M. Kerensky 14 years ago. An idea that never took hold to the degree its advocates predicted, community education, nevertheless, refuses to die. Over the past two or three years, the interest of educationalleaders has been stimulated once again by this proposal for expanding the mission and decision-making processes of public schools. In 49 of the 50 states (Hawaii being the exception), local school boards establish educational policy.

Within this governance context, the relationship between the school system and its community is fundamental. Historically, the public schools could count on a guaranteed clientele and faced little, if any, competition. As a result, school boards and administrators planned and implemented programs without substantive community input. Today public school officials are recognizing that perpetuating this isolationism creates weighty problems. A growing number of taxpayers no longer have direct contact with the schools. In many communities, nonpublic schools provide parents and students with alternatives for schooling. As a result, the fiscal and political support once taken for granted now must be nurtured. Given these conditions, it is not surprising that a growing number of educators and civic leaders are seeking alternatives to the practices that have isolated the decision-making processes of public schools. One of these options is called community education.

In the early 1960s there were very few teachers and administrators who had ever heard of community education. Yet by the early 1970s the concept could be found in 1,920 community schools across the United States. Such growth did little, however, to clarify the meaning of this new movement in public education. As a result, the movement tended to be viewed narrowly in terms of a single program, such as recreational opportunities for adults. Primarily because of such ambiguity, the movement lost momentum after the early 1970s.

This fastback examines the origins and meanings of community education. In particular, contemporary conditions spawning renewed interest in the concept are contrasted with conditions that initiated the movement 25 years ago. Community education is examined as a process and as a program. Its promises and potential pitfalls are discussed. And within these presentations, examples of outstanding programs and organizational designs are provided.

Reprinted and/or distributed with permission of Phi Delta Kappa International. All rights reserved.

Permission documentation is on file.