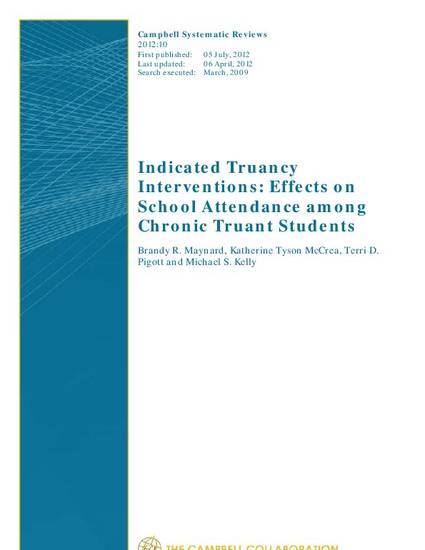 BACKGROUND
Truancy is a significant problem in the U.S. and in other countries around the world. Truancy has been linked to serious immediate and far-reaching consequences for youth, families, and schools and communities, leading researchers, practitioners, and policy makers to try to understand and to address the problem. Although numerous and significant steps have been taken at the local, state, and national levels to reduce truancy, the rates of truancy have at best remained stable or at worst been on the rise, depending on the indicator utilized to assess truancy rates.
The costs and impact of chronic truancy are significant, with both short- and long-term implications for the truant youth as well as for the family, school, and community. Although several narrative reviews and one meta-analysis of attendance and truancy interventions have attempted to summarize the extant research, there are a number of limitations to these reviews. It is imperative that we systematically synthesize and examine the evidence base to provide a comprehensive picture of interventions that are being utilized to intervene with chronic truants, to identify interventions that are effective and ineffective, and to identify gaps and areas in which more research needs to be conducted to better inform practice and policy.

OBJECTIVES
The main objective of this systematic review was to examine the effects of interventions on school attendance to inform policy, practice, and research. The questions guiding this study were:
1) Do truancy programs with a goal of increasing student attendance for truant youth affect school attendance behaviors of elementary and secondary students with chronic attendance problems?
2) Are there differences in the effects of school-based, clinic/community-based, and court-based programs?
3) Are some modalities (i.e., family, group, multimodal) more effective than others in increasing student attendance?

SEARCH STRATEGY
A systematic and comprehensive search process was employed to locate all possible studies between 1990 and 2009, with every effort made to include both published and unpublished studies to minimize publication bias. A wide range of electronic bibliographic databases and research registers was searched, websites of relevant research centers and groups were mined for possible reports, over 200 e-mails and letters were sent to programs listed in large databases of truancy programs compiled by the National Center for School Engagement and the National Dropout Prevention Center, and contact with researchers in the field of truancy and absenteeism was attempted. In addition, we examined reference lists of all previous reviews as well as citations in research reports for potential studies.

SELECTION CRITERIA
Studies eligible for this review were required to meet several eligibility criteria. Studies must have utilized a randomized, quasi-experimental, or single-group pre-posttest design with the aim of evaluating the effectiveness of interventions with a stated primary goal of increasing student attendance (or decreasing absenteeism) among chronic truant students. Studies must have measured an attendance outcome and reported sufficient data to calculate an effect size. Finally, studies must have been published between 1990 and 2009 in the United States, United Kingdom, Australia, or Canada.

DATA COLLECTION AND ANALYSIS
A total of 28 studies, reported in 26 reports, met final eligibility criteria and were included in this review and meta-analysis. Of the studies that were included, 5 utilized a randomized design (RCT), 11 utilized a quasi-experimental design (QED), and 12 utilized a single group pre-posttest design (SGPP). All eligible studies were coded using a structured coding instrument, with 20% of studies coded by a second coder.
Descriptive analysis was conducted to examine and describe data related to the characteristics of the included studies. Analysis of the mean effect size, the heterogeneity of effect sizes, and the relationship between effect size and methodological and substantive characteristics of the interventions was also conducted separately for the RCT/QED studies and the SGPP studies. The effect sizes were calculated using the standardized mean difference effect size statistic, correcting for small sample size using Hedges’ g (Hedges, 1992). Assuming a mixed effects model, the analog to the ANOVA and bivariate meta-regression frameworks were used to examine potential moderating variables related to study, participant, and intervention characteristics.

RESULTS
The meta-analytic findings demonstrated a significant overall positive and moderate mean effect of interventions on attendance outcomes. The mean effect size for interventions examined in the included RCT studies was .57 and the mean effect size for the QED studies was .43. No significant differences were observed between the RCT and QED studies in the magnitude of the treatment effect (Qb= .28, p >.05). The mean effect size of interventions examined using an SGPP design was .95. A moderate effect on attendance outcomes is encouraging; however, the overall mean effect size is masked by a large amount of heterogeneity, indicating significant variance in effect sizes between studies.
Moderator analyses found no significant differences in mean effects between studies on any moderating variable tested. No differences were found between school-, court-, or community-based programs or between different modalities of programs. The duration of the intervention also did not demonstrate any association with effect size. Collaborative programs and multimodal interventions produced statistically similar effects on attendance as non-collaborative and single-modality programs, which runs counter to the prevailing beliefs and recommendations for best practices in truancy reduction found in the literature.
Other significant findings from this study relate to methodological shortcomings, the absence of important variables as well as gaps in the evidence base. These findings include the lack of inclusion of minority students and a lack of reporting and statistical analysis of demographic variables, particularly race/ethnicity and socioeconomic status (SES). Given that race and SES have been linked to absenteeism, the absence of this data was surprising. The majority of studies also lacked adequate descriptions of the interventions, making replication of the intervention difficult, and failed to measure and report long-term outcomes.

AUTHORS’ CONCLUSIONS
Overall, the findings from this study suggest that chronic truant students benefit from interventions targeting attendance behaviors; thus it is important and worthwhile to intervene with chronic truant youth. Given the minimal differences in effects across program types and modalities, no one program type or modality stands out as being more effective than any other. Although no statistically significant differences in effects were found between types and modalities of interventions included in this review, there was a lack of available evidence to support the general belief (and popular “best-practice” recommendations) that collaborative and multimodal interventions are more effective than programs that are not collaborative and single modal interventions. Due to the small sample size and large heterogeneity between studies and within groups of studies, caution must be used when interpreting and applying the findings from this meta-analysis.
Overall, the studies included in the review improved attendance by an average of 4.69 days, almost a full school week. However, although the interventions included in this study were, overall, found to be effective, the mean rates of absenteeism at posttest in most studies remained above acceptable levels. This finding indicates the need for additional work and research. Developing more effective interventions and policies as well as studying outcomes of interventions, particularly with vulnerable and at-risk populations, is crucial to combating absenteeism.
The gaps and deficiencies identified in this study also affirm the need for increasing and strengthening the evidence base on which current policies and practices rest. Although additional outcome research is necessary, more of the same is not sufficient. Significant improvements in the quality of truancy intervention research are required and identified gaps need to be addressed. Recommendations to improve the quality and fill gaps in truancy intervention research are discussed here. In addition, given the significant and pervasive deficiencies in the extant research, a critical analysis of the practices, assumptions, and sociopolitical contexts underlying truancy intervention research seems warranted.

This is an open-access article distributed under the terms of the Creative Commons Attribution License, which permits unrestricted use, distribution, and reproduction in any medium, provided the original author and source are credited.

©Maynard et al. This is an open-access article distributed under the terms of the Creative Commons Attribution License, which permits unrestricted use, distribution, and reproduction in any medium, provided the original author and source are credited.