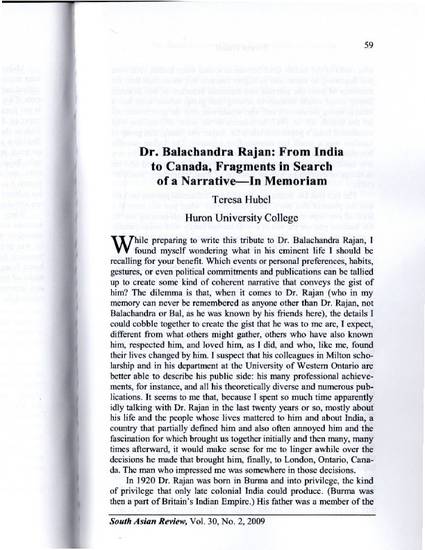 While preparing to write this tribute to Dr. Balachandra Rajan, I found myself wondering what in his eminent life I should be recalling for your benefit. Which events or personal preferences, habits, gestures, or even political commitments and publications can be tallied up to create some kind of coherent narrative that conveys the gist of him? The dilemma is that, when it comes to Dr. Rajan (who in my memory can never be remembered as anyone other than Dr. Rajan, not Balachandra or Dal, as he was known by his friends here), the details I could cobble together to create the gist that he was to me arc, I expect, different from what others might gather, others who have also known him, respected him, and loved him, as I did, and who, like me, found their lives changed by him. I suspect that his colleagues in Milton scholarship and in his department at the University of Western Ontario are better able to describe his public side: his many professional achievements, for instance, and all his theoretically diverse and numerous publications. It seems to me that, because I spent so much time apparently idly talking with Dr. Rajan in the last twenty years or so, mostly about his life and the people whose lives mattered to him and about India, a country that partially defined him and also often annoyed him and the fascination for which brought us together initially and then many, many times afterward it would make sense for me to linger awhile over the decisions he made that brought him, finally, to London, Ontario, Canada. The man who impressed me was somewhere in those decisions.