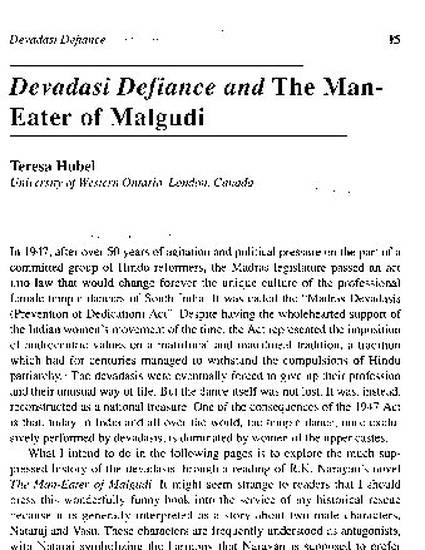 In 1947, after over 50 years of agitation and political pressure on the part of a committed group of Hindu reformers, the Madras legislature passed an act into law that would change forever the unique culture of the professional female temple dancers of South India. It was called the Madras Devadasis (Prevention of Dedication) Act. Despite having the wholehearted support of the Indian women’s movement of the time, the Act represented the imposition of androcentric values on a matrifocal and matrilineal tradition, a tradition which had for centuries managed to withstand the compulsions of Hindu patriarchy. The devadasis were eventually forced to give up their profession and their unusual way of life. But the dance itself was not lost. It was, instead, reconstructed as a national treasure. One of the consequences of the 1947 Act is that, today in India and all over the world, the temple dance, once exclusively performed by devadasis, is dominated by women of the upper castes.

What I intend to do in the following pages is to explore the much suppressed history of the devadasis through a reading of R.K. Narayan’s novel The Man-Eater of Malgudi. It might seem strange to readers that I should press this wonderfully funny book into the service of my historical rescue because it is generally interpreted as a story about two male characters, Nataraj and Vasu. These characters are frequently understood as antagonists, with Nataraj symbolizing the harmony that Narayan is supposed to prefer and Vasu the chaos he apparently dislikes. There are alternative explanations.