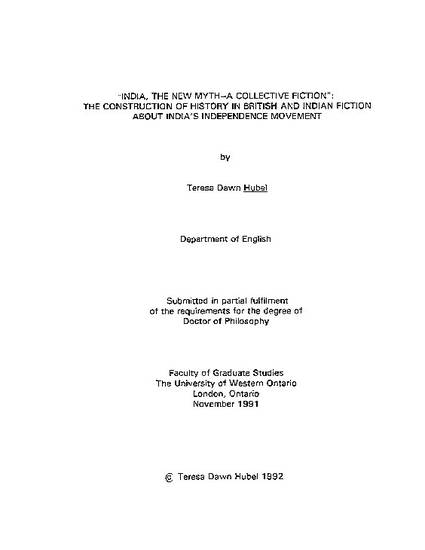 This dissertation is a study of imperialist and nationalist constructions of modern Indian history, encompassing Indo-Anglian and Anglo-Indian fiction written between 1880 and the year of India's political independence, 1947. Its theoretical approach is feminist and new historicist, and consequently it engages not only the fiction that sought to define the nationalist/imperialist moment in India but other public documents that contributed to this definition, such texts as British accounts of India's social life and moral problems, speeches, articles, and books by Indian nationalists, and analyses of the political situation written by British and Indian historians. This thesis is committed to the study of the literary text within a political, historical, and cultural context.;The first chapter examines two short stories by Rudyard Kipling, "The Enlightenments of Pagett, M. P." and "On the City Wall." Both stories, written in the late Victorian period, seek to contain the budding nationalist threat to British interests in India through on Orientalist assertion of knowledge. The Burnt Offering, written by the turn-of-the-century Canadian novelist Sara Jeannette Duncan, who was a resident of India for some 20 years, is the subject of the second chapter. In this novel Duncan vigorously defends the Anglo-Indian memsahib while constructing a nationalist movement that embraces Indian women and employs Indian images of the feminine. Duncan's imperialist agenda eventually overtakes an initially sympathetic depiction of Indian nationalism. The third chapter analyzes the homoerotic marriage of cultures in E. M. Forster's A Passage to India and the way in which the liberal imperialism in this novel erases the alterity of both the feminine and the Indian.;The second half of the thesis investigates the Indian side of the issue, first from the point of view of two little known Indian woman writers of the colonial period, the novelist Swarnakumari Devi and the reformer Pandita Ramabai Saraswati. This chapter, the fourth, explores the discursive formation of the high-caste Hindu woman in the occasionally nationalist, occasionally anti-patriarchal writing of these two women. The famous 1935 novel Untouchable by Mulk Raj Anand provides the focus for the fifth chapter. At this point the thesis examines the problem of untouchability as it is formulated in the 1930s writing of Anand, M. K. Gandhi, and B. R. Ambedkar, a well-known and well-loved untouchable leader who was opposed to the kind of Congress-centred nationalism that Gandhi represented. Finally the last chapter raises the issue of imperialist and nationalist nostalgia in relation to two novels, Philip Mason's The Wild Sweet Witch and Bhabani Bhattacharya's So Many Hungers!, both of which were written just months before the August 15, 1947 transfer of power, when the British administration in India withdrew in favour of a Congress-dominated Indian government.