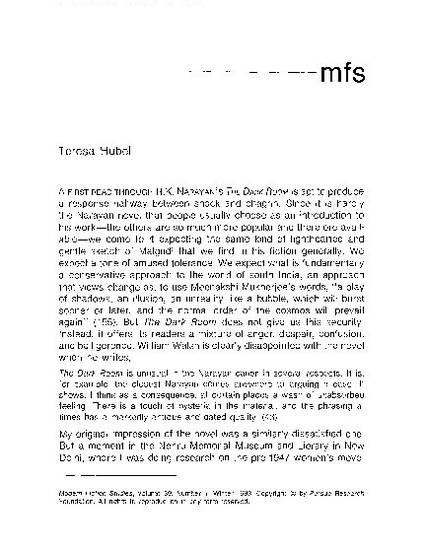 Written in the late 1930s, when a new irascibility crept into the largely female-produced discourse on the status of women in India, The Dark Room is about a particular woman's indignation and revolt. Savitri is a Hindu wife following in the glorified footsteps of other Hindu wives, such as her namesake from the Mahabharata and Sita of the Ramayana. Although she lives up to the ideals of servitude and devotion implicit in these powerful feminine figures, Savitri of The Dark Room is betrayed by a patriarchal system that allows her husband the freedom of infidelity but denies her the right to economic independence. At the close of the story she finds herself trapped in a marriage that she cannot end and that she can barely alter. But Savitri does rebel, though her rebellion is enormously circumscribed by her gendered helplessness. That Narayan documents her rebellion as well as her helplessness and, significantly, refuses to close on the endnote of tranquillity and detachment that characterizes most of his novels (the two qualities that Western literary scholars like best to celebrate In his work) makes The Dark Room a radical exception.

What I am going to argue in the pages that follow is that The Dark Room not only reveals the traces of the 1930s women's movement in India in its intersections with Indian nationalism of the time, but also that these traces ground the novel in ways that resist the discourse of timelessness that we have come to expect in Narayan's work. Understood within its historical context, this novel is a testament to a particular kind of female loneliness and loss. Outside of that very timely arena, The Dark Room can look like an aberration and feel like a disappointment, though neither of these responses does justice to its powerful message. Before we can explicate that message, we need first to acknowledge and explore the political circumstances that middle and upper class Indian women confronted in the period surrounding the production of this novel.