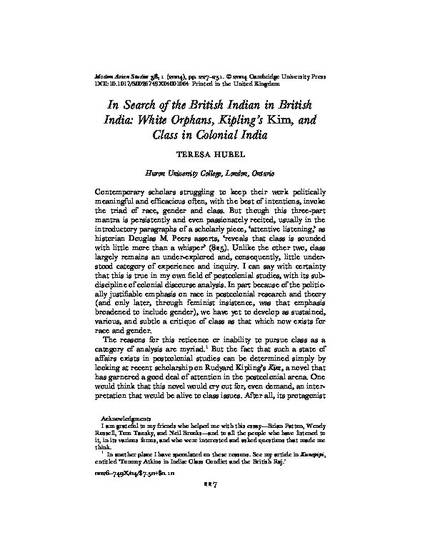 Contemporary scholars struggling to keep their work politically meaningful and efficacious often, with the best of intentions, invoke the triad of race, gender and class. But though this three-part mantra is persistently and even passionately recited, usually in the introductory paragraphs of a scholarly piece, ‘attentive listening,’ as historian Douglas M. Peers asserts, ‘reveals that class is sounded with little more than a whisper’ (825). Unlike the other two, class largely remains an under-explored and, consequently, little understood category of experience and inquiry. I can say with certainty that this is true in my own field of postcolonial studies, with its sub-discipline of colonial discourse analysis. In part because of the politically justifiable emphasis on race in postcolonial research and theory (and only later, through feminist insistence, was that emphasis broadened to include gender), we have yet to develop as sustained, various, and subtle a critique of class as that which now exists for race and gender.

Thanks are given to the friends who assisted with this essay—Brian Patton, Wendy Russell, Tom Tausky, and Neil Brooks—and to all the people who have listened to it, in its various forms, and who were interested and asked questions that made the author think.