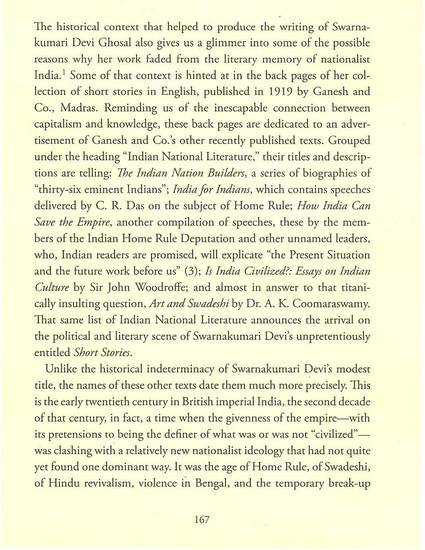 Aim:
To discuss how Swarnakumari Devi's family connections as much as her sex contributed to why her work faded from the memory of nationalist India.

The historical context that helped to produce the writing of Swarna-kumari Devi Ghosal also gives us a glimmer into some of the possible reasons why her work faded from the literary memory of nationalist India. Some of that context is hinted at in the back pages of her collection of short stories in English, published in 1919 by Ganesh and Co., Madras. Reminding us of the inescapable connection between capitalism and knowledge, these back pages are dedicated to an advertisement of Ganesh and Co.'s other recently published texts. Grouped under the heading "Indian National Literature," their titles and descriptions are telling: The Indian Nation Builders, a series of biographies of "thirty-six eminent Indians"; India for Indians, which contains speeches delivered by C. R. Das on the subject of Home Rule; How India Can Save the Empire, another compilation of speeches, these by the members of the Indian Home Rule Deputation and other unnamed leaders, who, Indian readers are promised, will explicate "the Present Situation and the future work before us" (3); Is India Civilized?: Essays on Indian Culture by Sir John WoodrofFe; and almost in answer to that titanically insulting question, Art and Swadeshi by Dr. A. K. Coomaraswamy. That same list of Indian National Literature announces the arrival on the political and literary scene of Swarnakumari Devis unpretentiously entitled Short Stories.

Unlike the historical indeterminacy of Swarnakumari Devi's modest title, the names of these other texts date them much more precisely. This is the early twentieth century in British imperial India, the second decade of that century, in fact, a time when the givenness of the empire--with its pretensions to being the definer of what was or was not "civilized"--was clashing with a relatively new nationalist ideology that had not quite yet found one dominant way. It was the age of Home Rule, of Swadeshi, of Hindu revivalism, violence in Bengal, and the temporary break-up of the National Congress; it was the after-Tilak-and-before-Gandhi moment in Indian history, in short, a liminal age, which might have gone in any one of a number of directions. What I will argue in this essay is that Swarnakumari Devi's almost forgotten collection of short stories in English, and particularly the last story, "Mutiny," not only manifests the restlessness and indecisiveness of that era but contributed to the creation of the next--the Gandhian one. In so doing, I aim to be part of a still exclusive but growingly public conversation about this neglected author whose family connections as much as her sex got in the way of her posterity.

According to ARIEL, this paper is copyright 2011, but was first published July 2010.