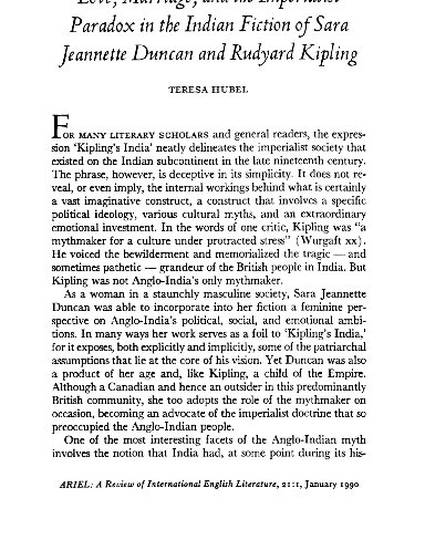 Article
"The Bride of His Country": Love, Marriage, and the Imperialist Paradox in the Indian Fiction of Sara Jeannette Duncan and Rudyard Kipling
ARIEL
Download Find in your library
Document Type
Article
Publication Date
Disciplines
Abstract

For many literary scholars and general readers, the expression 'Kipling's India' neatly delineates the imperialist society that existed on the Indian subcontinent in the late nineteenth century. The phrase, however, is deceptive in its simplicity. It does not reveal, or even imply, the internal workings behind what is certainly a vast imaginative construct, a construct that involves a specific political ideology, various cultural myths, and an extraordinary emotional investment. In the words of one critic, Kipling was "a mythmaker for a culture under protracted stress" (Wurgaft xx). He voiced the bewilderment and memorialized the tragic — and sometimes pathetic — grandeur of the British people in India. But Kipling was not Anglo-India's only mythmaker.

As a woman in a staunchly masculine society, Sara Jeannette Duncan was able to incorporate into her fiction a feminine perspective on Anglo-India's political, social, and emotional ambitions. In many ways her work serves as a foil to 'Kipling's India,' for it exposes, both explicitly and implicitly, some of the patriarchal assumptions that lie at the core of his vision. Yet Duncan was also a product of her age and, like Kipling, a child of the Empire. Although a Canadian and hence an outsider in this predominantly British community, she too adopts the role of the mythmaker on occasion, becoming an advocate of the imperialist doctrine that so preoccupied the Anglo-Indian people. One of the most interesting facets of the Anglo-Indian myth involves the notion that India had, at some point during its historical association with the West, loved and married Britain. Both Kipling and Duncan use this metaphor (Kipling much more frequently than Duncan), apparently regarding it as an accurate depiction of the colonial relationship between these two countries. Indeed, this metaphor of love and marriage is of extreme importance in their work, since it serves as their explanation and justification of a political belief that, as the nineteenth century drew to a close, was becoming increasingly difficult to defend — namely, the belief in the necessary continuance of British imperialism in India. Traditional criticism tends to associate Anglo-Indian writers with a univocal and inflexible imperialist ideology; but this approach overlooks the philosophical complexities that accompanied the British presence in India, complexities which these authors often acknowledge in their fiction. Although the colonial mentality expressed in the works of Kipling and Duncan is indeed, as critics have observed, dominated by the conviction that the British had a right to maintain control over India, neither of these writers can properly be labelled apologists of the Empire, at least not without qualifications. Kipling, for example, did not become a full-blown imperialist until around the turn of the century when he attempted to incite public enthusiasm in Britain for the cause of the Boer War.Prior to this period, during and shortly after his second residency in India, he was much more equivocal in his stance on imperialism, frequently questioning the British administration of India and commiserating with the plight of the Indians under alien rule...

Citation Information
Teresa Hubel. ""The Bride of His Country": Love, Marriage, and the Imperialist Paradox in the Indian Fiction of Sara Jeannette Duncan and Rudyard Kipling" ARIEL Vol. 21 Iss. 1 (1990) p. 3 - 19
Available at: http://works.bepress.com/teresa_hubel/15/