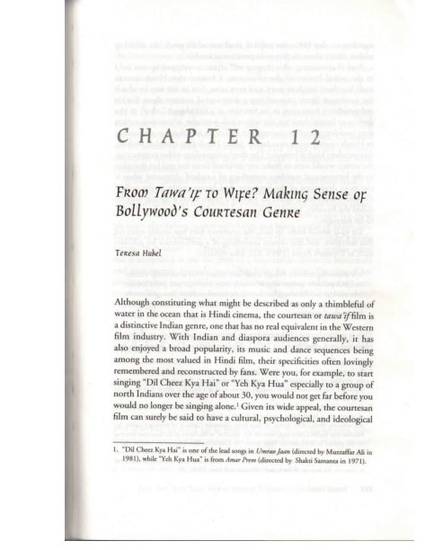 Although constituting what might be described as only a thimbleful of water in the ocean that is Hindi cinema, the courtesan or tawa'if film is a distinctive Indian genre, one that has no real equivalent in the Western film industry. With Indian and diaspora audiences generally, it has also enjoyed a broad popularity, its music and dance sequences being among the most valued in Hindi film, their specificities often lovingly remembered and reconstructed by fans. Were you, for example, to start singing "Dil Cheez Kya Hai" or "Yeh Kya Hua" especially to a group of north Indians over the age of about 30, you would not get far before you would no longer be singing alone.' Given its wide appeal, the courtesan film can surely be said to have a cultural, psychological, and ideological significance that belies the relative smallness of its genre. Its meaning within mass culture surpasses its presence as a subject.

And that meaning, this chapter will argue, is wrapped up not only in the veiled history of the courtesans, a history that Hindi cinema itself has done much to warp and even erase, but in the way in which the courtesan figure camouflages a deep-seated anxiety about female independence from men in its function as a festishized "other" to the dominant female character, the wife or wife-wannabe, whose connotation is so overdetermined in mainstream Indian society that her appearance in Hindi cinema seems mandatory.