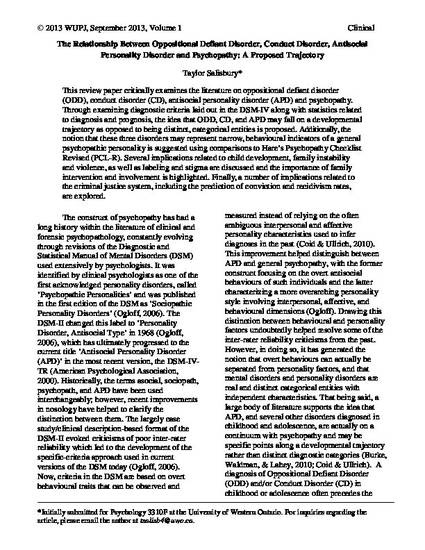 This review paper critically examines the literature on oppositional defiant disorder (ODD), conduct disorder (CD), antisocial personality disorder (APD) and psychopathy. Through examining diagnostic criteria laid out in the DSM-IV along with statistics related to diagnosis and prognosis, the idea that ODD, CD, and APD may fall on a developmental trajectory as opposed to being distinct, categorical entities is proposed. Additionally, the notion that these three disorders may represent narrow, behavioural indicators of a general psychopathic personality is suggested using comparisons to Hare’s Psychopathy Checklist Revised (PCL-R). Several implications related to child development, family instability and violence, as well as labeling and stigma are discussed and the importance of family intervention and involvement is highlighted. Finally, a number of implications related to the criminal justice system, including the prediction of conviction and recidivism rates, are explored.