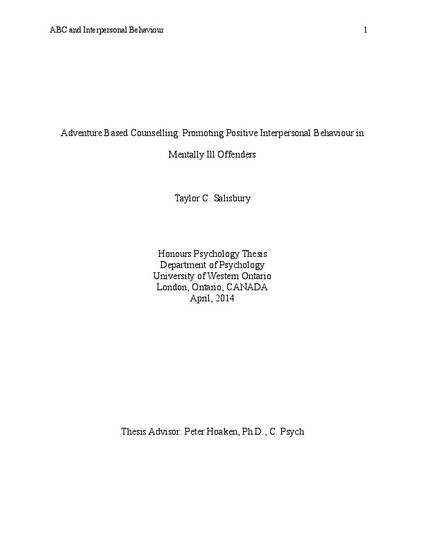 The purpose of the current study was to examine the effectiveness of an adventure-based counselling (ABC) program on interpersonal behaviour within a forensic psychiatric population. Very little research has examined the effectiveness of an adventure-therapy approach with this population, and to our knowledge, an ABC program has never been attempted, much less examined for efficacy. Participants in this study were offenders at the Southwest Center for Forensic Mental Health Care in St. Thomas, Ontario who were designated not criminally responsible on account of mental disorder. Offenders took part in a 12-session ABC program which addressed interpersonal skills through various challenge activities. Interpersonal behaviour (i.e., the way clients interacted with each other) was assessed using measures of anger, cognitive and affective mindfulness, quality of life, coping style, physical assault, and events requiring seclusion or restraint. These variables were measured before starting and after completion of the program using both self-assessment and file review. It was hypothesized that participants would show statistically significant improvements on all six measures following participation in the ABC program. A multivariate analysis of variance was conducted to analyze the effect of the program from pre- to post-test. Results indicated that several variables did change in the hypothesized direction; however, two variables actually decreased significantly following participation. Though none of our hypotheses were explicitly supported, sample size was a serious limitation and these findings represent only the first iteration of this ABC study. Future repetitions may benefit from methodological nuances that aim to increase statistical power.