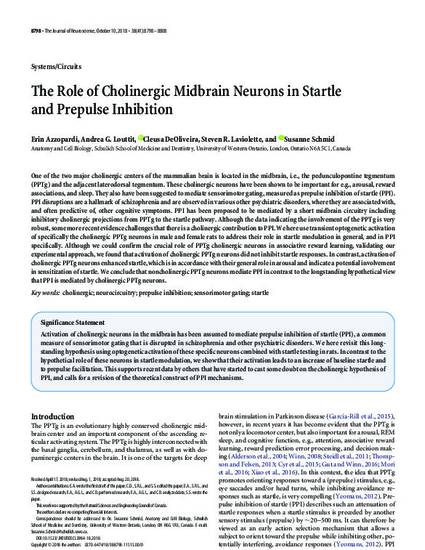 One of the two major cholinergic centers of the mammalian brain is located in the midbrain, i.e., the pedunculopontine tegmentum (PPTg) and the adjacent laterodorsal tegmentum. These cholinergic neurons have been shown to be important for e.g., arousal, reward associations, and sleep. They also have been suggested to mediate sensorimotor gating, measured as prepulse inhibition of startle (PPI). PPI disruptions are a hallmark of schizophrenia and are observed in various other psychiatric disorders, where they are associated with, and often predictive of, other cognitive symptoms. PPI has been proposed to be mediated by a short midbrain circuitry including inhibitory cholinergic projections from PPTg to the startle pathway. Although the data indicating the involvement of the PPTg is very robust, some more recent evidence challenges that there is a cholinergic contribution to PPI. We here use transient optogenetic activation of specifically the cholinergic PPTg neurons in male and female rats to address their role in startle modulation in general, and in PPI specifically. Although we could confirm the crucial role of PPTg cholinergic neurons in associative reward learning, validating our experimental approach, we found that activation of cholinergic PPTg neurons did not inhibit startle responses. In contrast, activation of cholinergic PPTg neurons enhanced startle, which is in accordance with their general role in arousal and indicate a potential involvement in sensitization of startle. We conclude that noncholinergic PPTg neurons mediate PPI in contrast to the longstanding hypothetical view that PPI is mediated by cholinergic PPTg neurons.