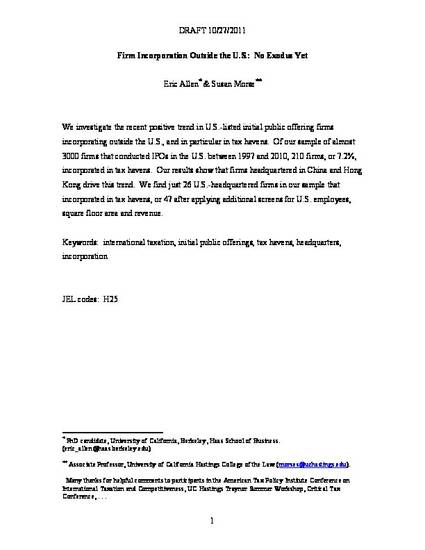 Unpublished Paper
Firm Incorporation Outside the U.S.: No Exodus Yet
(2011)
Download
Abstract

As one tax director told the Senate Finance Committee in 1999, the U.S. tax rules for multinationals with a U.S.-incorporated parent are onerous enough that even a U.S.-based company like Intel might sensibly choose to incorporate its parent outside the U.S, presumably in a tax haven jurisdiction. Is the recent positive trend in the proportion of U.S.-listed initial public offering firms incorporating outside the U.S. enough evidence to suggest that corporations are heeding the substance of that tax director’s advice? Our results indicate that it is not.

Only 210 firms, or about 7.2% of our sample of 2,911 firms that conducted IPOs in the U.S. between 1997 and 2010, incorporated in a tax haven jurisdiction. Our results indicate that firms headquartered in China and Hong Kong drive this trend. Of the 210 tax haven firms, we initially identify 26 headquartered in the U.S. If we add screening tests for U.S. headquarters, for example based on U.S. employees, square floor area and revenue, we observe a total of 47 U.S.-headquartered, tax-haven-incorporated firms. We do not observe a mass exodus of U.S.-headquartered firms incorporating in tax haven jurisdictions. However, we identify those that do make that decision and describe some directions for possible research.