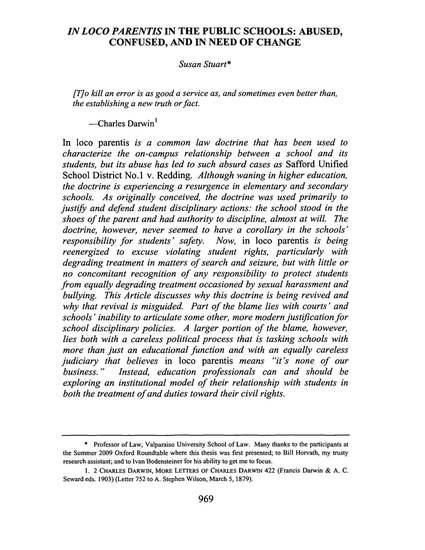 In loco parentis is a common law doctrine that has been used to characterize the on-campus relationship between a school and its students, but its abuse has led to such absurd cases as Safford Unified School District No.1 v. Redding. Although waning in higher education, the doctrine is experiencing a resurgence in elementary and secondary schools. As originally conceived, the doctrine was used primarily to justify and defend student disciplinary actions: the school stood in the shoes of the parent and had authority to discipline, almost at will. The doctrine, however, never seemed to have a corollary in the schools' responsibility for students' safety. Now, in loco parentis is being reenergized to excuse violating student rights, particularly with degrading treatment in matters of search and seizure, but with little or no concomitant recognition of any responsibility to protect students from equally degrading treatment occasioned by sexual harassment and bullying. This Article discusses why this doctrine is being revived and why that revival is misguided. Part of the blame lies with courts' and schools' in.ability to articulate some other, more modern justification for school disciplinary policies. A larger portion of the blame, however, lies both with a careless political process that is tasking schools with more than just an educational function and with an equally careless judiciary that believes in loco parentis means "it's none of our business. " Instead, education professionals can and should be exploring an institutional model of their relationship with students in both the treatment of and duties toward their civil rights.