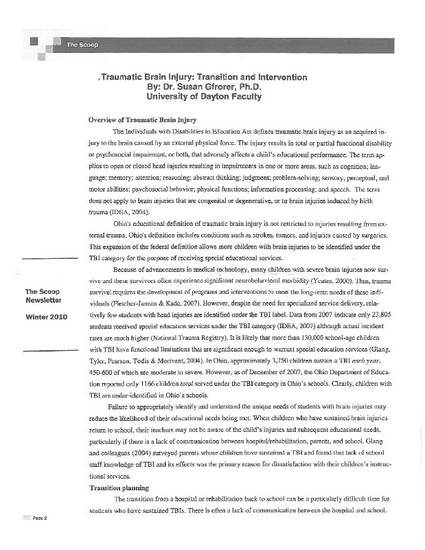 Article
Traumatic Brain Injury: Transition and Intervention
Ohio School Psychologists Association Newsletter
Download
Document Type
Editorial
Publication Date
Abstract
The Individuals with Disabilities in Education Act defines traumatic brain injury as an acquired in· jury to the brain caused by an external physical force. The injury results in total or partial functional disability or psychosocial impairment, or both, that adversely affects a child's educational performance. The term applies to open or closed head injuries resulting in impairments in one or more areas, such as cognition; langnage; memory; attention; reasoning; abstract thinking; judgment; problem-solving; sensory, perceptual, and motor abilities; psychosocial behavior; physical functions; information processing; and speech. The term does not apply to brain injuries that are congenital or degenerative, or to brain injuries induced by birth trauma (IDEA, 2004). Ohio's educational definition of traumatic brain injury is not restricted to injuries resulting from external trauma. Ohio's definition includes conditions such as strokes, tumors. and injuries caused by surgeries. This expansion of the federal definition allows more children with brain injuries to be identified under the TBI category for the purpose of receiving special educational services. Because of advancements in medical technology, many children with severe brain injuries now survive and these survivors often experience significant neurobehavorial morbidity (Yeates, 2000). Thus. trauma survival requires the development of programs and interventions to meet the long-term needs of these individuals (Aetcher-Janzen & Kade, 2(07). However, despite the need for specialized service delivery, relatively few students with bead injuries are identified under the TBI label. Data from 2007 indicate only 23,805 students received special education services under the TBI category (IDEA, 2(07) although actual incident rates are much higher (National Trauma Registry). It is likely that more than 130,000 school-age children with TBI have functional limitations that are significant enough to warrant special education services (GIang, TYler, Pearson, Todis & Morivant, 2004). In Ohio, approximately 3,750 children sustain a TBI each year, 450-600 of which are moderate to severe. However, as of December of 2007, the Ohio Departnient of Education reported only 1166 children total served under the TBI category in Ohio's schools. Clearly, children with TBI are under-identified in Ohio's schools. Failure to appropriately identify and understand the unique needs of students with brain injuries may reduce the likelihood of their educational needs being met When children who have sustained brain injuries return to school, their teachers may not be aware of the child's injuries and subsequent educational needs, particularly if there is a lack of communication between hospital rehabilitation, parents, and school. GIang and colleagues (2004) surveyed parents whose children have sustained a TBI and found that lack of school staff knowledge of TBI and its effects was the primary reason for dissatisfaction with their children's instructional services.
Inclusive pages
2-4
Document Version
Published Version
Comments

This document is provided for download by permission of the publisher. Permission documentation is on file.