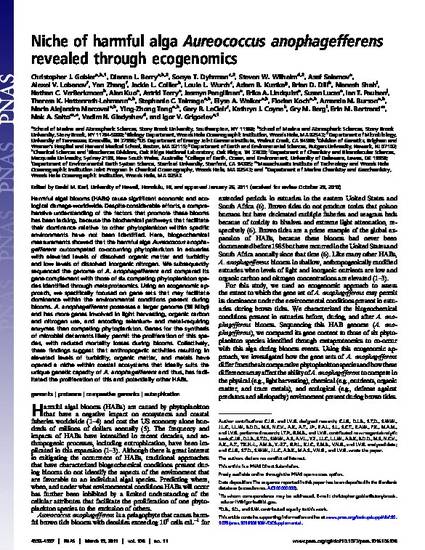 Harmful algal blooms (HABs) cause significant economic and ecological damage worldwide. Despite considerable efforts, a comprehensive understanding of the factors that promote these blooms has been lacking, because the biochemical pathways that facilitate their dominance relative to other phytoplankton within specific environments have not been identified. Here, biogeochemical measurements showed that the harmful alga Aureococcus anophagefferens outcompeted co-occurring phytoplankton in estuaries with elevated levels of dissolved organic matter and turbidity and low levels of dissolved inorganic nitrogen. We subsequently sequenced the genome of A. anophagefferens and compared its gene complement with those of six competing phytoplankton species identified through metaproteomics. Using an ecogenomic approach, we specifically focused on gene sets that may facilitate dominance within the environmental conditions present during blooms. A. anophagefferens possesses a larger genome (56 Mbp) and has more genes involved in light harvesting, organic carbon and nitrogen use, and encoding selenium- and metal-requiring enzymes than competing phytoplankton. Genes for the synthesis of microbial deterrents likely permit the proliferation of this species, with reduced mortality losses during blooms. Collectively, these findings suggest that anthropogenic activities resulting in elevated levels of turbidity, organic matter, and metals have opened a niche within coastal ecosystems that ideally suits the unique genetic capacity of A. anophagefferens and thus, has facilitated the proliferation of this and potentially other HABs.