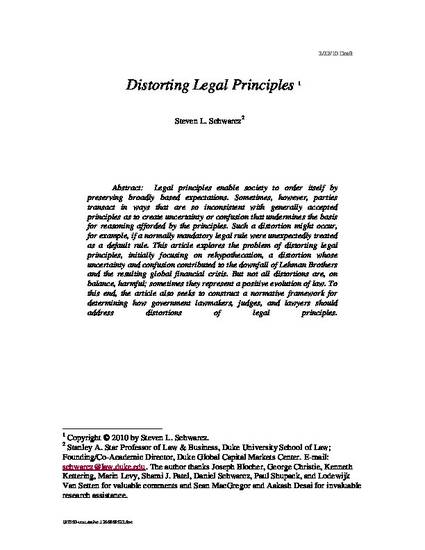 This article explores the important but until now largely neglected problem of distorting legal principles. Although legal principles enable society to order itself by preserving broadly based expectations, parties sometimes transact in ways that are so inconsistent with accepted principles as to create uncertainty or confusion that undermines the basis for reasoning afforded by the principles. The article starts by examining a fundamental distortion of the nemo dat legal principle (one cannot give what one does not have), which was a trigger of Lehman Brothers’ recent downfall. A practice called “rehypothecation” so distorted nemo dat that Lehman’s customers were uncertain whether their investments could be attached by Lehman’s creditors. As a result, they withdrew their investments on rumors of Lehman’s insolvency, inadvertently (and much like a bank run) triggering its collapse. The article constructs a normative framework for determining how lawmakers, judges, and lawyers should address distortions of legal principles. Not all legal distortions have net costs; sometimes they represent a positive evolution of law (as in the case of the holder-in-due-course distortion of nemo dat). Therefore any normative framework should attempt to balance costs and benefits. However a simple balancing test would be misleading because private interest groups favoring a distortion would almost certainly receive a disproportionate share of the benefits with the public potentially suffering a disproportionate share of any harm. In this potentially biased context, the article argues that distortions of legal principles should be assessed not on a simple cost-benefit basis but by a heavily-outweigh balancing test. This type of test not only can help rebalance distributive inequities but also can offset unknown or undervalued costs.