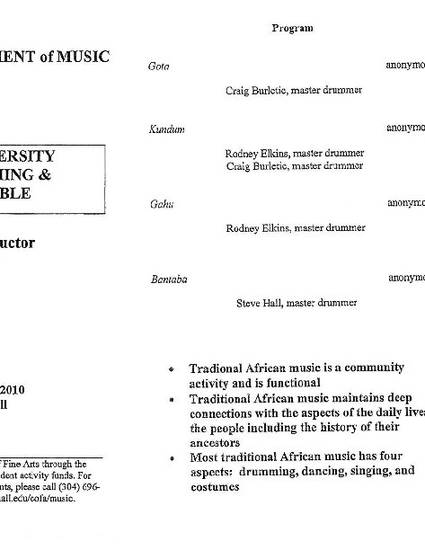 Traditional African music is a community activity and is functional.

Traditional African music maintains deep connections with the aspects of the daily lives of the people including the history of their ancestors.

Traditional music of the Ahanta and Nzema people of the western region of Ghana. This dance utilizes more spectacular and acrobatic dance moves than the other dances on the program. The first slow section features strong hemiola-based drumming parts placing three notes superimposed over two notes during the same time period.

Gahu is a form of music and dance that originated in Southwestern Nigeria as a Yoruba wedding celebration. Adopted by the Southern Ewe people of Ghana, Togo, Benin, and Nigeria, Gahu has evolved into a recreational music and dance performed at any social occasion by both sexes and all age groups. The name Gahu comes from the Ewe words "ga" meaning rich or wealthy and "hu"meaning drum or dance for the wealthy.

Bantaba is a festival dance of the Djolla, Ballanta and Mandingo people of Senegal and Guinea. Bantaba would normally be performed at the end of harvest season and would involve everyone in the community. The purpose for this music would be to give thanks to God for a bountiful harvest and to bring the community together in celebration. This piece uses the djembe for the master drum and supportive parts. The djun-djun is the heartbeat of the ensemble, functioning as a bass voice, with a bell attached to provide clarity for the ensemble.