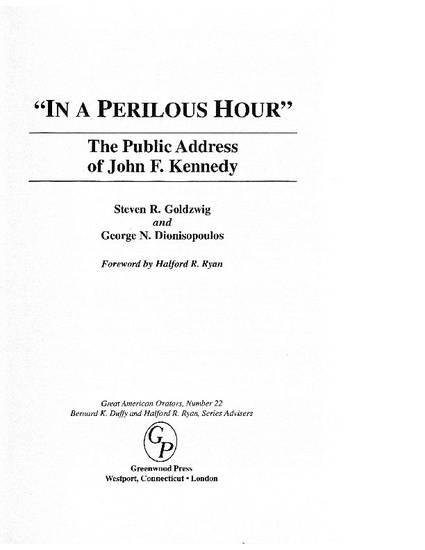 Book
In a Perilous Hour: The Public Address of John F. Kennedy
Books by Marquette University Faculty
Description
This first book-length critical analysis of Kennedy's public address defines how he aroused Americans to rise to the opportunities and challenges that he defined for them. This rigorously researched study offers an in-depth analysis of the development of President Kennedy as a public speaker and a balanced view of his civil rights, foreign policy, presidential, and other types of speeches. Eight speech texts accompany the analysis. This reference and teaching tool also offers a selected chronology of major speeches along with a bibliography of important primary and secondary sources. Designed for students, teachers, and professionals in the fields of rhetoric, political communication, presidential studies, and American history.
Publication Date
Publisher
Greenwood Publishing Group Inc.
Disciplines
Comments

Radio and Television Report to the American People on the Soviet Buildup in Cuba, October 22, 1962, 171.

Radio and Television Address to the American People on the Nuclear Test Ban Treaty, July 26, 1963, 189.