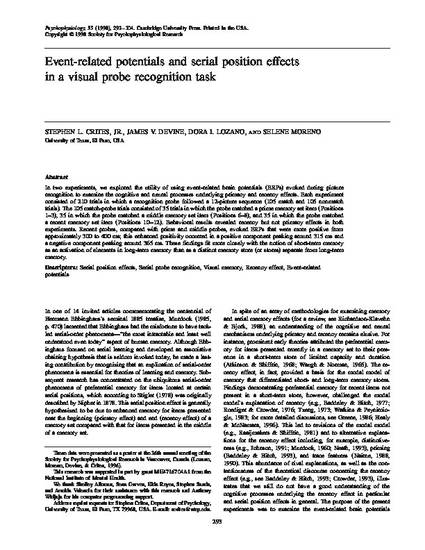 In two experiments, we explored the utility of using event-related brain potentials (ERPs) evoked during picture recognition to examine the cognitive and neural processes underlying primacy and recency effects. Each experiment consisted of 210 trials in which a recognition probe followed a 12-picture sequence (105 match and 105 nonmatch trials). The 105 match-probe trials consisted of 35 trials in which the probe matched a prime memory set item (Positions 1–3), 35 in which the probe matched a middle memory set item (Positions 6–8), and 35 in which the probe matched a recent memory set item (Positions 10–12). Behavioral results revealed recency but not primacy effects in both experiments. Recent probes, compared with prime and middle probes, evoked ERPs that were more positive from approximately 300 to 400 ms; this enhanced positivity occurred in a positive component peaking around 315 ms and a negative component peaking around 365 ms. These findings fit more closely with the notion of short-term memory as an activation of elements in long-term memory than as a distinct memory store (or stores) separate from long-term memory.