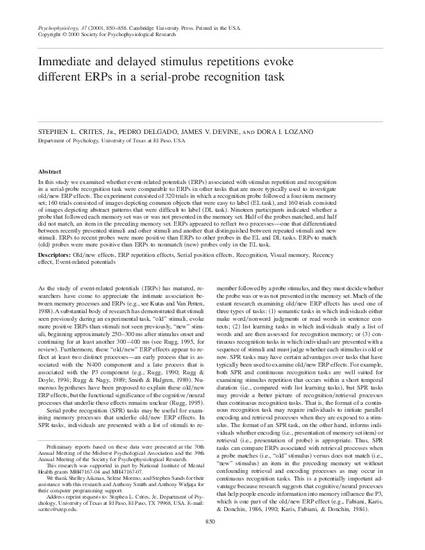 Examined whether event-related potentials (ERPs) associated with stimulus repetition and recognition in a serial-probe recognition task were comparable to ERPs in other tasks that are more typically used to investigate old/new ERP effects. The experiment consisted of 320 trials in which a recognition probe followed a four-item memory set; 160 trials consisted of images depicting common objects that were easy to label (EL task), and 160 trials consisted of images depicting abstract patterns that were difficult to label (DL task). 19 Ss indicated whether a probe that followed each memory set was or was not presented in the memory set. Half of the probes matched, and half did not match, an item in the preceding memory set. ERPs appeared to reflect two processes-one that differentiated between recently presented stimuli and other stimuli and another that distinguished between repeated stimuli and new stimuli. ERPs to recent probes were more positive than ERPs to other probes in the EL and DL tasks. ERPs to match (old) probes were more positive than ERPs to nonmatch (new) probes only in the EL task.