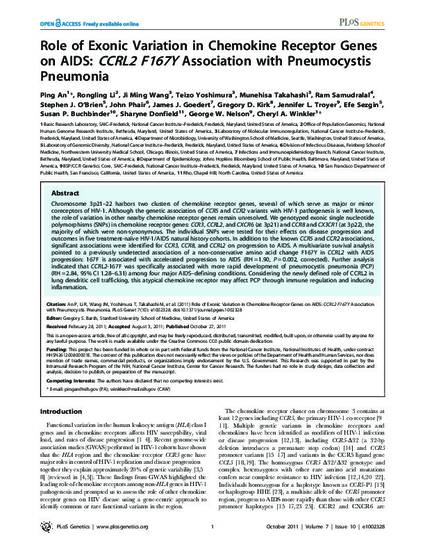 Chromosome 3p21–22 harbors two clusters of chemokine receptor genes, several of which serve as major or minor coreceptors of HIV-1. Although the genetic association of CCR5 andCCR2 variants with HIV-1 pathogenesis is well known, the role of variation in other nearby chemokine receptor genes remain unresolved. We genotyped exonic single nucleotide polymorphisms (SNPs) in chemokine receptor genes: CCR3, CCRL2, and CXCR6 (at 3p21) and CCR8 and CX3CR1 (at 3p22), the majority of which were non-synonymous. The individual SNPs were tested for their effects on disease progression and outcomes in five treatment-naïve HIV-1/AIDS natural history cohorts. In addition to the known CCR5 and CCR2associations, significant associations were identified for CCR3, CCR8, and CCRL2 on progression to AIDS. A multivariate survival analysis pointed to a previously undetected association of a non-conservative amino acid change F167Y in CCRL2 with AIDS progression: 167F is associated with accelerated progression to AIDS (RH = 1.90, P = 0.002, corrected). Further analysis indicated that CCRL2-167F was specifically associated with more rapid development of pneumocystis pneumonia (PCP) (RH = 2.84, 95% CI 1.28–6.31) among four major AIDS–defining conditions. Considering the newly defined role of CCRL2 in lung dendritic cell trafficking, this atypical chemokine receptor may affect PCP through immune regulation and inducing inflammation.

This is an open-access article, free of all copyright, and may be freely reproduced, distributed, transmitted, modified, built upon, or otherwise used by anyone for any lawful purpose. The work is made available under the Creative Commons CC0 public domain dedication.