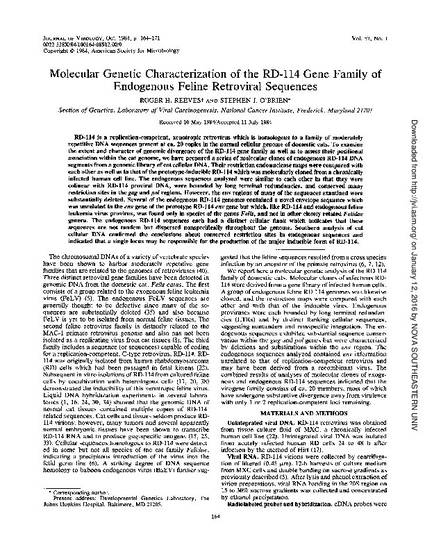 RD-114 is a replication-competent, xenotropic retrovirus which is homologous to a family of moderately repetitive DNA sequences present at ca. 20 copies in the normal cellular genome of domestic cats. To examine the extent and character of genomic divergence of the RD-114 gene family as well as to assess their positional association within the cat genome, we have prepared a series of molecular clones of endogenous RD-114 DNA segments from a genomic library of cat cellular DNA. Their restriction endonuclease maps were compared with each other as well as to that of the prototype-inducible RD-114 which was molecularly cloned from a chronically infected human cell line. The endogenous sequences analyzed were similar to each other in that they were colinear with RD-114 proviral DNA, were bounded by long terminal redundancies, and conserved many restriction sites in the gag and pol regions. However, the env regions of many of the sequences examined were substantially deleted. Several of the endogenous RD-114 genomes contained a novel envelope sequence which was unrelated to the env gene of the prototype RDI-114 env gene but which, like RD-114 and endogenous feline leukemia virus provirus, was found only in species of the genus Felis, and not in other closely related Felidae genera. The endogenous RD-114 sequences each had a distinct cellular flank which indicates that these sequences are not tandem but dispersed nonspecifically throughout the genome. Southern analysis of cat cellular DNA confirmed the conclusions about conserved restriction sites in endogenous sequences and indicated that a single locus may be responsible for the production of the major inducible form of RD-114.