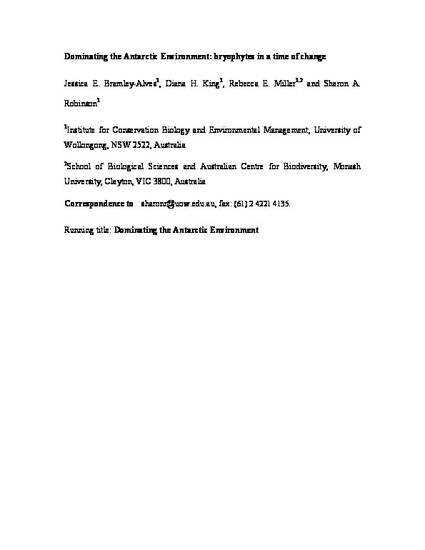 Abstract
Polar ecosystems, and particularly Antarctica, are one of the few environs in which bryophytes dominate the flora. Their success in these regions is due to bryophytes’ ability to withstand an array of harsh conditions through their poikilohydric lifestyle. However, the unique conditions that allow bryophytes to proliferate over other forms of vegetation also create considerable limitations to growth and photosynthetic activity. High latitude areas are already experiencing some of the most pronounced and rapid climatic change, especially in the Arctic, the Sub-Antarctic Islands and Maritime Antarctica, and these are predicted to continue over the next century. This climatic change is already impacting the flora of the polar regions both via direct and/or indirect impacts on plant species. Water availability and temperature are undoubtedly the most influential factors that determine bryophyte productivity in the Antarctic, but the ozone hole is also having an impact either directly via increased ultraviolet-B radiation and/or indirectly through the increasing wind speeds associated with ozone depletion. In a time of shifting climate the dominance of bryophytes in these regions may be threatened.
Grant Number
ARC/DP110101714
Additional Grant Number
http://purl.org/au-research/grants/ARC/DP110101714
Citation Information
Jessica Bramley-Alves, Diana H King, Sharon A Robinson and Rebecca E Miller. "Dominating the Antarctic environment: bryophytes in a time of change" (2014)
Available at: http://works.bepress.com/srobinson/86/