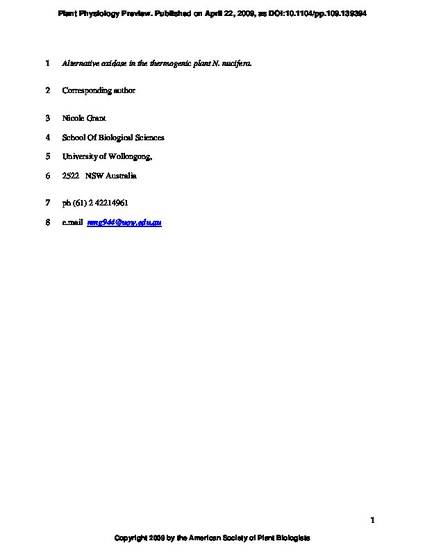 Abstract
Sacred lotus (Nelumbo nucifera) regulates temperature in its floral chamber to 32°C to 35°C across ambient temperatures of 8°C to 40°C with heating achieved through high alternative pathway fluxes. In most alternative oxidase (AOX) isoforms, two cysteine residues, Cys1 and Cys2, are highly conserved and play a role in posttranslational regulation of AOX. Further control occurs via interaction of reduced Cys1 with α-keto acids, such as pyruvate. Here, we report on the in vitro regulation of AOX isolated from thermogenic receptacle tissues of sacred lotus. AOX protein was mostly present in the reduced form, and only a small fraction could be oxidized with diamide. Cyanide-resistant respiration in isolated mitochondria was stimulated 4-fold by succinate but not pyruvate or glyoxylate. Insensitivity of the alternative pathway of respiration to pyruvate and the inability of AOX protein to be oxidized by diamide suggested that AOX in these tissues may lack Cys1. Subsequently, we isolated two novel cDNAs for AOX from thermogenic tissues of sacred lotus, designated as NnAOX1a and NnAOX1b. Deduced amino acid sequences of both confirmed that Cys1 had been replaced by serine; however, Cys2 was present. This contrasts with AOXs from thermogenic Aroids, which contain both Cys1 and Cys2. An additional cysteine was present at position 193 in NnAOX1b. The significance of the sequence data for regulation of the AOX protein in thermogenic sacred lotus is discussed and compared with AOXs from other thermogenic and nonthermogenic species.
Disciplines
Citation Information
Nicole M. Grant, Yoshihiko Onda, Yusuke Kakizaki, KKikukatsu Ito, et al.. "Two Cys or Not Two Cys? That Is the Question; Alternative Oxidase in the Thermogenic Plant Sacred Lotus" (2009)
Available at: http://works.bepress.com/srobinson/20/
Related Files
Grant et al Supplemental figure S1.pdf (151 KB)