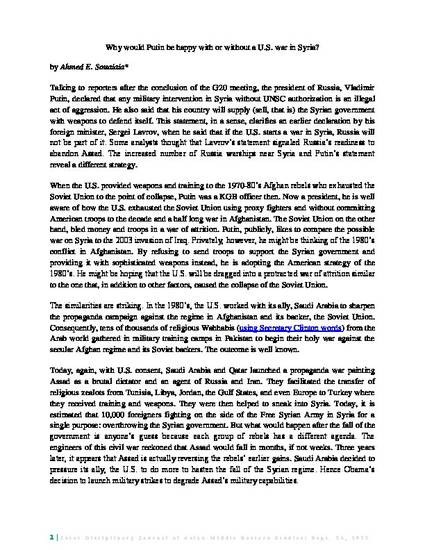 Popular Press
Why Putin Would Be Happy With or Without War in Syria?
Inter Disciplinary Journal of Asian-Middle Eastern Studies (2013)
Download
Abstract

Talking to reporters after the conclusion of the G20 meeting, the president of Russia, Vladimir Putin, declared that any military intervention in Syria without UNSC authorization is an illegal act of aggression. He also said that his country will supply (sell, that is) the Syrian government with weapons to defend itself. This statement, in a sense, clarifies an earlier declaration by his foreign minister, Sergei Lavrov, when he said that if the U.S. starts a war in Syria, Russia will not be part of it. Some analysts thought that Lavrov’s statement signaled Russia’s readiness to abandon Assad. The increased number of Russia warships near Syria and Putin’s statement reveal a different strategy.

Keywords
Disciplines
Publication Date
Citation Information
Ahmed E SOUAIAIA. "Why Putin Would Be Happy With or Without War in Syria?" Inter Disciplinary Journal of Asian-Middle Eastern Studies (2013)
Available at: http://works.bepress.com/souaiaia/22/