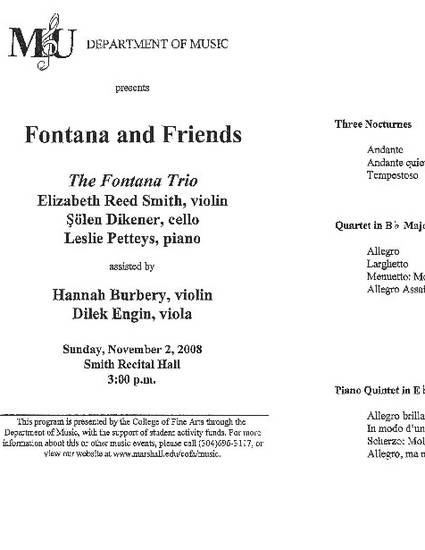 Born in Geneva, Switzerland, Ernest Bloch studied violin with Eugène Ysayë, but entered his father's clock business and for a while composed only on the side. In 1916 he moved to the U.S. and taught at the Mannes School of Music. During this time he established himself as a "Jewish composer." He became the first director of the Cleveland Institute of Music in 1920 and turned to a more neoclassical style of composition. The Nocturnes were composed in 1924, the same year he became an American citizen.

Mozart wrote his final three quartets K. 575, K. 589, and K. 590 in 1789-90 when he was in desperate financial straits and suffering from a bout of depression. The three are known collectively as the "Prussian Quartets" or the "Cello Quartets," as they were dedicated to King Friedrich Wilhelm II of Prussia, a fine amateur cellist. The quartets have prominent cello parts, especially in the high register, and thus mark a departure from the Haydnesque model. Mozart completed only the three of a planned set of six quartets, and they were never sent to the king. Although Mozart himself was to refer to them as "tiresome works" these are among his most mature and intimate compositions.

Sketched out in only five days, the beloved Piano Quintet by Robert Schumann was dedicated to his wife, pianist Clara Schumann, and was one of the pioneering works for the combination of string quartet with piano. The work was critically acclaimed during Schumann's lifetime, although Franz Liszt called it "too Leipzig-like" or provincial – Leipzig was where Schumann lived at the time he composed it. Brahms liked the quintet so much that he made a solo piano transcription as a birthday present for Clara. There is a famous anecdote, which may or may not be true, in which Clara became ill on the day of a scheduled performance of the quintet; Felix Mendelssohn therefore sat in for Clara and sightread the piano part. Mendelssohn was impressed with the work but suggested that Schumann rewrite the second Trio of the Scherzo and replace it with a livelier version, which he did.