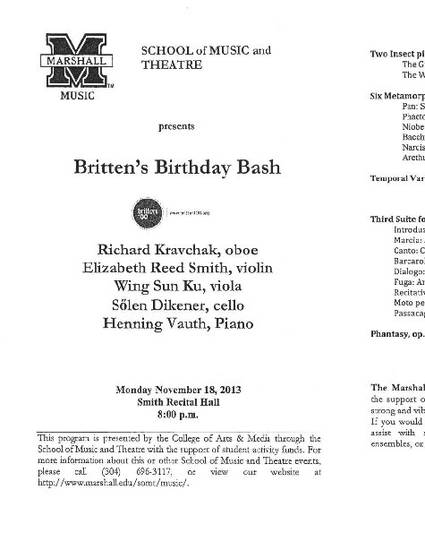 Dr. Richard Kravchak is the Director of the School of Music and Theatre at Marshall University in Huntington, West Virginia. He has performed concerts throughout Europe, Asia, and the Americas. Kravchak has appeared as a soloist with ensembles as diverse as The Dubuque Symphony, The University of Hawaii Wind Ensemble, The Carson Symphony, Banda Espinia de Portugal and the Orquesta Symphonica de El Salvador. The Dubuque Telegraph Herald has written "Kravchak's playing revealed a real beauty of tone, not monolithic, but always changing in color and intensity. He makes even the most difficult lines seem almost effortless." The Florida Flambeau raves "Kravchak made a good case for his virtuosity." Dr. Kravchak has presented solo performances at conferences and festivals including The International Double Reed Society, The North American Saxophone Alliance, Festival Forfest, the International Clarinet Society, and many others. He holds performance degrees from the Eastman School of Music, the Juilliard School, and Florida State University.

Dr. Elizabeth Reed Smith Elizabeth Reed Smith is Professor of violin, viola and chamber music at Marshall University. Since earning degrees in violin performance from the Yale University School of Music and the Eastman School of Music, Dr. Smith has received numerous awards, including first prize in the Columbia Philharmonic Orchestra Young Artists Competition. She has studied violin with Charles Castleman, Linda Cerone, Szymon Goldberg, Peter Salaff and Burton Kaplan. Smith's performances have included solo appearances with Orchestra New England, the Connecticut Chamber Orchestra, the Columbia Philharmonic Orchestra, the Huntington Symphony Orchestra, and the Marshall University Symphony Orchestra. As violinist of the Nevelson Duo, she recorded a CD on Albany Records, American Music for Violin and Piano. Smith also performs in the Millefiori Trio with Henning Vauth and Marshall cello professor Sőlen Dikener. She has appeared as a solo recitalist and chamber musician throughout the eastern United States.

Wing-Sun Ku Violist Wing-Sun Ku began his musical studies at the age of five. A graduate of the Central Music Conservatory in Beijing China, he went on to earn his Certificate of Performance from University of North Texas, where he studied with Susan Dubois.

Dr. Henning Vauth serves as Assistant Professor of Piano and Coordinator of Keyboard Studies at Marshall University (USA). A laureate of the Concours Grieg International Competition for Pianists in Norway (Schubert Prize) and the IBLA Grand Prize International Piano Competition in Italy, he has performed at venues in the United States and in Europe, such as Alice Tully Hall, Lincoln Center in New York, the Konzerthaus in Berlin, and Salle Cortot in Paris.