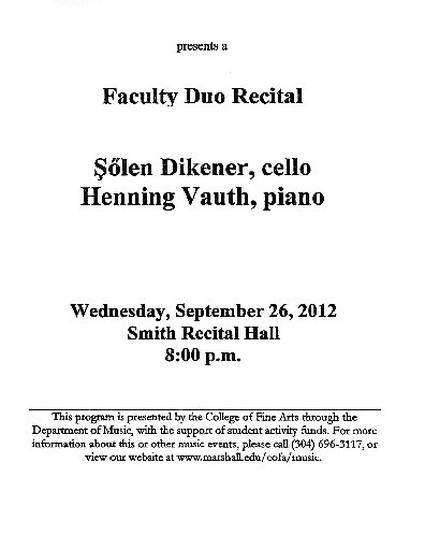 Just a little over 172 years ago, on September 12, 1840, Robert Schumann and Clara Wieck finally became a married couple, after a long and strenuous private and legal fight with Clara's father Friedrich Wieck, who had been bitterly opposed to the marriage since Robert's proposal in 1837. It is during this time, that the two pieces by Robert and Clara Schumann to be heard tonight were written - a time of unacknowledged love and partially also a time of physical separation. Especially in Robert's Arabeske, both, a tender and a more impassionate longing are apparent.

When Clara Schumann wrote her Impromptu "Souvenir de Vienne" in

1838, based on a simple and beautiful melody Joseph Haydn had written some 40 years ago as a birthday anthem to Francis II, Emperor of the

Holy Roman Empire and later of Austria, she had no idea that in 1922 the same melody would become the national anthem of her own country Germany (until the present day).

On a personal note, I would like to mention that-despite a slight feeling of nostalgia - the choice of this particular piece for my performance repertoire is not grounded in patriotic sentiment. Rather, I am moved by the poet Hoffmann von Fallersleben's intentions, who wrote the text of the current German national anthem to be sung to Haydn's melody in 1841. 171 years ago, his message was one of inclusiveness, equal rights, and unification, of disbanding the various German small states in favor of a united Germany. Today, Germans sing only the third stanza, beginning with "Einigkeit und Recht und Freiheit" (unity and rights and freedom).

The "Four Serious Songs" were the last songs composed by Brahms, then

63 years of age. He died less than a year later, on April 3, 1897. This song-cycle for bass voice and piano uses texts from the Old Testament and the famous words of St. Paul to the Corinthians. Here Brahms has musically posed the central question is of human existence. What outlasts death? What is essential for the future, the generations yet to come, which distinguishes man from beasts? Brahms did not call his work "Four Spiritual" or "Four Biblical" songs, but rather "Serious" songs. So he makes it clear in the title that these solo songs with piano would permit to resound in an almost symphonic dimension. Brahms composed them with a method of modal transformations which broke through the earlier uses of modality that had arisen in earlier stages of musical development, beginning with the "church modes" around the Sixteenth century, then through the establishment of a clear polarity between major and minor, which Beethoven then went beyond, in his late works (around Op. 132), using modes in a new way, to produce new expressive possibilities. How sensitive Brahms could be about the Four Serious Songs, shows in a letter to the daughter of Clara Schumann he wrote on July 7, 1896, two months after the death of her mother: "When a volume of 'serious songs' reaches you, don't misunderstand my intent. When you get it, apart from the dear old custom of writing your name in it right away, look at the songs completely in earnest. I wrote them in the first week of May; similar words often occupy me. I didn't intend to have to wait for worse news about your mother-but often, something speaks and incites, almost unconscious to us, deep inside men, which sometimes might well resound as poem or music. You won't be able to play through these songs, while the words are still gripping you. But I implore you to regard them, really, as your own sacrifice for the death and memory of your beloved mother, and to put them away."

In his Suite in D minor for solo cello, Paul Tortelier has revived the old, but currently rare, role of the virtuoso composer. Inspired by his admiration for J. S. Bach, he composed a modem suite without becoming an avant-garde. The five movements of the suite were written in 1944 and they were dedicated to the memory of author's father. In 1955, the new Allemande replaced its original. The work utilizes air the technical possibilities of the cello and also exhibits the emotional nature of its composer. The Prelude employs a series of pedal notes on the tonic and dominant keys and the tonality wonders throughout the movement. The Allemande narrates an untold story in a flowing and unhurried manner, yet at times it urges, representing emotions merging with thoughts. The Courante has the title "The Gull" and is in 12/8 time with a vivo e leggier character. It is a contemplation of a bird sweeping its way down to the earth. In the Sarabande composer changes the key to a lyrical mood in D major. The use of deep chords state long phrases, providing nobility and graciousness to this adagio dance. The first Bourée continues with a lively march-like mode that is contrasted by its elegant counterpart. The finale Gigue (molto risoluto) shows strength that underlines the need for courage and it also represent the power of music as communicating phenomenon for the mankind, for which Tortelier dedicated his entire life.