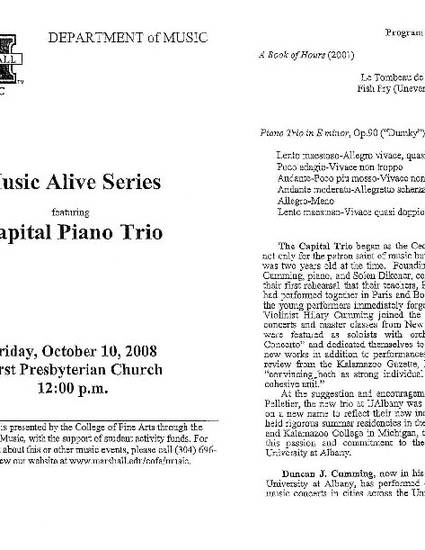 At the suggestion and encouragement of former Dean Joan Wick-Pelletier, the new trio at UAlbany was established, and they have taken on a new name to reflect their new incarnation in New York. Having held rigorous summer residencies in the past, at Bates College in Maine and Kalamazoo College in Michigan, they are pleased to be rekindling this passion and commitment to the art of chamber music at the University at Albany.

This past September be lectured and performed as part of "Focus on Frank Glazer: A Mini-Festival," which he organized and hosted at the University at Albany. Two days later he performed with Frank Glazer to a packed house at the Franco-American Heritage Center in Lewiston, Maine, a concert which opened the new season there. In October a brief but intense New England tour included six recitals in four days. The next week he had his first performance with the University at Albany Orchestra, playing the Grieg Concerto in A minor, Op. 16. In the spring he travels to Massachusetts and West Virginia for recitals in addition to his concerts in New York. A recent review from the Portland Press Herald describes his playing as "technically flawless... thoughtful, deliberate and balanced, without a wasted gesture or any histrionics rather like Rachmaninoff.''

Born near the Canadian border in Presque Isle, Maine, Cumming graduated Phi Beta Kappa with highest honors from Bates College in 1993, where he studied with Frank Glazer. He frequently collaborates with Mr. Glazer in double concerto, two piano, and four hand repertoire; in 1997 they performed all the solo works of Brahms in a series of concerts commemorating the centenary of the composer's death. In 1994 he received a full scholarship from the European Mozart Foundation and participated in intense chamber music study and performance at the European Mozart Academy in Prague. Upon his return to America he studied with Patricia Zander at the New England Conservatory, where he received his Master of Music degree in 1996. In May of 2003 he graduate with the Doctor of Music degree from Boston University, where his principal teacher was Mana Clodes Jaguaribe and his dissertation advisors were John Daverio and Martin Amlin.

Sően Dikener continues his music career in the USA and in Turkey; as a cello professor at Marshall University and as music director of the international summer music academy and chamber music festival Akademi Datca.

The artist performed in the US, Turkey, Germany, Austria and France as a recitalist, chamber musician and soloist with orchestras. As a dedicated chamber musician, Dikener shared the stage with Shangai String Quartet; as well as performed several groups. Since 2002 he plays with Fontana Piano Trio.

In recording studio, Dikener premiered the cello works by Turkish composers for Albany Records and AK Muzik labels. His first CD was released in 1998 and it is available at www.towerrecords.com. His other CD is dedicated to the music of Ilhan Baran (2002). A dedicated teacher Dr. Dikener established the annual Ohio Valley Cello Festival in 2003 to gather cellists for a festive cello day. During his tenure with Kalamazoo Symphony as principal cellist, he had the opportunity to play with most prestigious musicians.

He began his cello studies at the age of eight and attended the State Conservatory of Music in Ankara, Turkey in the class of "Highly Gifted Students". Following his college graduation at the age of 18 he worked with Prof. Tobias Kühne in Vienna, Austria, and became an assistant to legendary Paul and Maud Tortelier in Nice France where he also worked with Frieder Lenz and Michel Lethiec. He obtained his chamber music "perfectionnement" degree in Nice.

Mr. Dikener immigrated to the United States in 1992, and completed his cello studies at Louisiana State (MM) and Michigan State (DMA) Universities. His teaching experience includes fulltime professorships at Central Michigan University and Hacettepe University (Turkey) and as director of Crescendo Academy in Michigan.