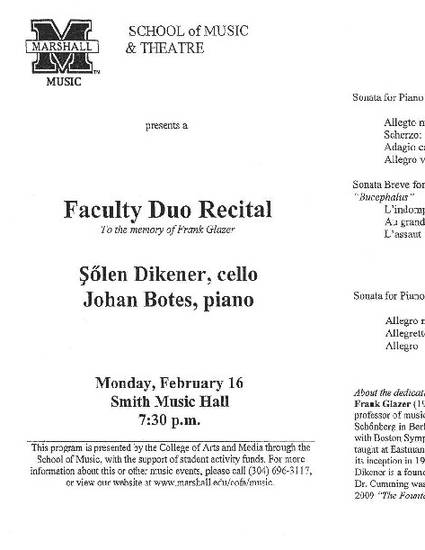 Since the publication of his op.5 two cello sonatas in 1797, Beethoven created a new cello and piano duo genre with equal emphasis in solo parts. At that point he had one of the finest cellist of his time, Duport brothers performing the cello line which featured cello's color, mood, big range, singing voice and robust staccatos. Ten years later, Beethoven returned back to compose another cello sonata op. 69 in A major. It was a calmer year for him and he wanted to get several premieres done in order to introduce new works. This would also help him with the needed the cash income. In these All-Beethoven concerts the program included first four symphonies, fourth piano concerto, Leonora and Coriolan overtures. Following these concerts he turned his attention to chamber music. The three works from 1807 were the cello sonata and two piano trios op.70; none of them were heroic in spirit but similar to op.59 string quartets in boldness, freshness and general scope. However the expressive lines became somewhat less clear and narrative was now mysterious, more like poetry, and less like a story telling. In this sonata the cello melody contains the germ of all themes throughout the work. The A major tonality feels settled and it contrasts to its parallel A minor in the second movement. There are small cadenzas for each instrument. After a short singing Adagio, sonata ends with a brilliant finale.

Bucephalus was the horse of Alexander the Great, and one of the most famous actual horses of antiquity. As one of his chargers, Bucephalus served Alexander in numerous battles. The French cellist and composer Paul Tortelier composed this highly programmatic Sonata Breve, "Bucephale," in 1983. This cello sonata is dedicated to Prince Charles who is a famous horseman and amateur cellist. The music begins with Alexander's first meeting with the horse, through their final battle together, ending with Bucephalus' death. The opening of the sonata begins as a battle of wits between the horse and the rider. Alexander figures out that the horse was simply afraid of his own shadow and he managed to calm him by diverting his attention and handling him delicately. The moment of calming is depicted by a tender moment in the music. The piece ends, unfortunately, with the death of Bucephale in battle as it falls down a cliff.

Johannes Brahms composed two sonatas for piano and cello. The first sonata op.38 in E minor was composed in 1862 while the composer was having a summer vacation near Cologne with composer Albert Dietrich and Clara Schumann who mostly played the piano parts of Brahms' new works. The sonata was inspired with Bach in mind and Brahms paid homage to him in this piece. There are figurative models of themes from Bach's The Art of Fugue however he distinctly presents his own style with an insistent, syncopated piano accompaniment along with the cello's broad main tune which creates a feeling of agitation. In its original form, the sonata had the Allegro, Adagio and the Allegretto movements; but later in 1865 Brahms added the finale and rearranged the movements. The new second movement refers to Viennese style of dance, in this case a Minuet that is paired with a dark, sentimental Trio. The finale is a three-voiced fugue that reminisces the fugal last movement of the Beethoven cello sonata op.102 No.2. In times the movement has some pastoral feel which brings back the main tune with more intensity toward the relentless coda.