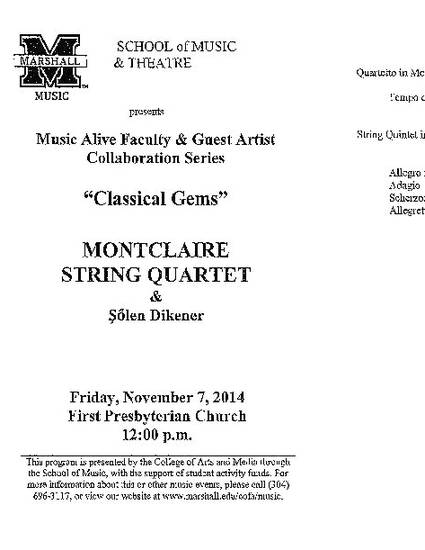 The Montclaire String Quartet will be celebrating its 25th year as Quartet-in-Residence of the West Virginia Symphony Orchestra with the 2014-2015 season. In addition to performing its own four-concert series in Charleston and recitals around the state, each of the Quartet members serve as the principal of the Symphony's string sections. A large part of Montclaire's mission is to bring classical music to children throughout West Virginia, and the Quartet plays approximately 70 uniquely innovative programs per year, reaching as many as 14,000 kids of all ages annually. A special educational concert was seen throughout the state on a one-hour West Virginia Public Broadcasting special for the Arts and Letters series at the Governor's Mansion. These various accomplishments have placed the Montclaire String Quartet in the heart of the Kanawha Valley community and they have been proud recipients of the Mayor's Award for Outstanding Organization given by the Fund for the Arts. The Montclaire are previous prizewinners in The Coleman Chamber Ensemble Competition, Chamber Music Society of the Monterey Peninsula Competition, Chamber Music Yellow Springs Competition, Evian International String Quartet Competition and the Banff International String Quartet Competition. They have previously held positions as Artists-in-Residence at the University of Northern Iowa and the University of Wisconsin at Whitewater. For many summers it was featured as Quartet-in-Residence at the New Hampshire Music Festival. Montclaire String Quartet has always been committed to performing contemporary works for their audiences. As part of a consortium of four chamber ensembles, the Quartet was awarded a grant to commission a piece by composer Morton Subotnik that was premiered in the 1998-99 season. The Quartet was also invited to perform and subsequently record Katherine Hoover's piano quintet, Da Pacem, which has been released on the Koch Classics label. This led to a successful recital on the Terrace Theater Series at Washington's Kennedy Center. The quartet recently gave the world premiere of West Virginia composer David Williams's String Quartet No. 1, as well as a presentation of "Black Angels" by West Virginia composer George Crumb. In the 2008-2009 season, the quartet in conjunction with the West Virginia Symphony, was awarded a National Endowment for the Arts Grant to present works by American composers. This led to a series of highly successful programs state-wide featuring the works of Darol Anger among others.