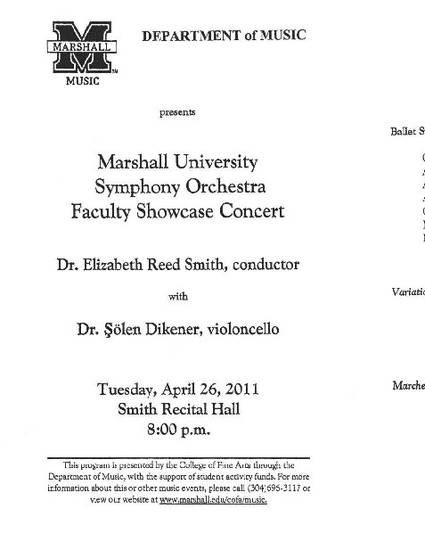 Dr. Şölen Dikener received high praise from renowned cellists Paul Tortelier ("with his artistic personality, Dikener possesses the affection of his masters") and Janos Starker ("a wonderful cellist!"). Dikener has taught cello and bass at Marshall University since 2002. In 2006 he founded the International Summer Music Academy and Festival "Akademi Datça" in Turkey and currently serves as its artistic director. He also regularly performs with the Capital Piano Trio, based at SUNY at Albany, New York.

His current 2010-11 season concerts include performances at Harvard University, Northeastern University, Clark University, and SUNY at Albany. As soloist and chamber collaborator, Dikener continues to perform special discovery projects, performing and recording the world premiere works by Turkish composers in the USA and Europe. In 2000, he began his research of discovering unperformed and forgotten works by leading Turkish composers. He has recorded for Discmakers, A.K. Müzik and Yesa labels. His recordings are available from iTunes, Amazon, Cdbaby, D&R Booksellers and other dealers.

Dr. Dikener earned his Bachelor’s degree in cello performance at age eighteen from the State Music Conservatory in Ankara, Turkey where he studied in the class of "Highly Gifted Students". After a year's study with Tobias Kühne in the Hoschschule fur Musik in Vienna, he went to Nice, France to study with legendary Paul and Maud Tortelier. He also obtained his chamber music degree from the Conservatoire National de Nice. He completed his doctoral degree at Michigan State University.

French composer Jules Massenet is known today mostly for his operas Manon, Werther and Thaïs, but his twenty five operas were much in vogue in his day, thanks to his skill as a melodist. Massenet studied with Ambrose Thomas at the Paris Conservatoire and won the Prix de Rome in 1863; he spent the three subsequent years in Rome, where he made the acquaintance of Franz Liszt. Part of his musical legacy is his famous students he was the teacher of Gustave Charpentier, Ernest Chausson, and Georges Enescu, among others.

Massenet's 1885 opera Le Cid is set in 12th century Spain. The plot revolves around the famous knight known as "El Cid" who stopped the advance of the Moors. The ballet occurs in Act 2, on a lovely spring day when townspeople celebrate with a series of dances from the various regions of Spain.

Composer Léon Boëllmann would probably be as famous as fellow 19th century French organist-composers Widor, Vierne, Pierné, Dubois, and Saint-Saëns had he lived longer than 35 years. Today he is known primarily for the Suite Gothique for organ, although he composed numerous works for organ and various chamber and orchestral works. Cellist Paul Tortelier did much to popularize the Variations Symphoniques.

The work begins with a dramatic introduction, after which the cello introduces the lyrical theme. The variations are not as "varied" as those of some composers but are well-constructed nonetheless. The cello is often prominent and virtuostic but sometimes becomes part of the overall "symphonic" texture.

In 1876 the Russian Musical Society commissioned Tchaikovsky to write an orchestral work for a concert to benefit the Red Cross, the proceeds of which would aid Serbian war veterans. (Serbia was at that time at war with the Ottoman Empire.) It was a popular cause in Russia at that time. Tchaikovsky called it his Russo-Serban March. The programmatic march begins with a Serbian folk tune played, according to Tchaikovsky's directions "at the tempo of a funeral march." The dirge, describing the oppression of the Serbs, gives was to second, happier, Serbian melody, but a long crescendo climaxes with the return of the funeral march at full volume. Trumpet and horn calls lead into a rustic dance introduced by the woodwinds, depicting the Russians rallying to the aid of the Serbs. As the orchestration thickens the Russian national anthem, "God Save the Tsar," is heard. The opening material is repeated, reminding us of the struggle of the Slavic people, and then the clarinets introduce another Russian tune in a major key. There is a final rendition of "God Save the Tsar" and the orchestra finishes with a triumphant coda.