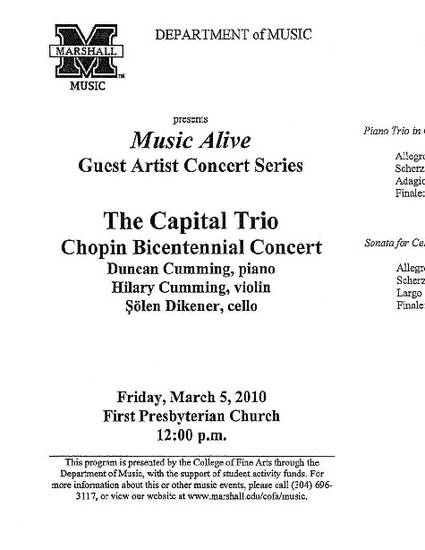 Fryderyk Chopin was born March 1, 1810 in Zelazowa Wola, Poland, and this program celebrates his 200th birthday. The music represents his entire life, with one very early piece, one from the middle of his composing career, and his very last published work. Virtually all of his compositions are for solo piano, and this great quantity is represented by the Scherzo which opens the program, but the rest of the program is given over to his only major chamber works, both of which are rarely heard. The Piano Trio is an early work, completed in Poland in 1829, and is roughly contemporary to the Rondo for Two Pianos Frank Glazer and I played here last year. In 1830 Chopin left Poland and was never to return, although he couldn't have known that at the time. After brief stays in Vienna, Munich, and Stuttgart, Chopin settled in Paris, where both the Scherzo and the Sonata for Cello and Piano were written.

Despite the fact that in my Analysis and Synthesis class I spend more time than my students would like on the subject of programming and program order I will take a moment here to mention how we arrived at this program. The somewhat standard idea of presenting the composers in chronological order of their birth doesn't apply because this is music of all one composer. One might say I have already broken the rule of variety but this is a special occasion, and we do have a variety of genre with one solo, one duo, and one trio. The second order I considered was order of composition, chronology within a single lifespan, but this put the solo after the trio and I think it is strange to hear a solo instrument in the same hall on the same half immediately following a larger ensemble work because it doesn't fill the performance space in the same way. This may not be true, but I had to follow that rule on this program because my students might be reading these notes and I've told them it's true. In fact at one point I considered having the program in ascending order of number of performers on the stage-solo, duo, trio. This works well for two reasons: First, there is an accumulation of sound in the hall with each new work. Second, it leads nicely into our Capital Trio (with guests) program for next season, part of the Youth Movements Festival III which will include a quartet and a quintet, thus tonight 1, 2, 3 … and next season 4, 5. We do have a solo, duo, and trio, but not in that order. Why, then, you might ask, can I put the duo after the trio? There is intermission, a sorbet to cleanse the palette, so to speak, so we can all listen with fresh ears after the break. Ultimately finishing with the Cello Sonata made the most sense to me, as it was written near the end of Chopin's life and is his last published work.

Since the word Scherzo (literally 'joke" in Italian) appears three times in this program I will take a minute to discuss its form. The overall form is usually ABA, corresponding to the form of a minuet (minuet proper, contrasting section called a trio, repeat of the minuet). This is essentially the form that Haydn, Mozart, and Beethoven used for scherzo movements within larger works and it is the form of the two scherzi on this program that appear as individual movements. The Scherzo for solo piano that begins the program, however, is something entirely different. This was added almost as an afterthought to this program, partly because I discussed the structure with students in class (and I thought I would therefore make them suffer through a slightly longer concert). We also felt in the end we couldn't celebrate Chopin's birthday properly without at least one piece for solo piano. This piece is part scherzo form (minuet) and part sonata allegro form (exposition of two contrasting ideas and key areas, development, and recapitulation). It isn't quite a scherzo because it goes from the trio into a development rather than back to the scherzo proper, but it isn't quite a sonata because the material from the trio, which would serve in this case as second subject of the exposition, doesn't return in the recapitulation. In other words it is a scherzo on a much larger scale than one might find in a movement of a Haydn sonata, or even a Beethoven sonata, or even the scherzi found as movements later in this same program. Therefore it stands as a single movement piece on its own rather than as a movement of a larger work, and it was in works of this type that Chopin was most innovative and ultimately successful.

The Piano Trio in G minor, Op. 8 and the Sonata for Cello and Piano, Op. 65 have parallel forms. Each begins with a sonata-allegro form movement, followed by a scherzo, slow movement, and finale. The trio was written in 1829 when the composer was just 19 years old and hadn't yet moved to Paris. The first movement is marked con fuoco (with fire) and risoluto (resolute). If studying the architecture or harmonic structure of a piece doesn't interest you feel free to skip to the next paragraph at this point. This movement contains all of the elements of sonata-allegro form-contrasting themes in the exposition, much modulation in the development, and a recapitulation that restates the exposition with some changes before an expansive coda. What is interesting in this early work is that instead of changing keys in the exposition, as almost all sonata-allegro movements do, Chopin presents the first and second subjects both in G minor. This presenting of the second theme in the "right" key, which is actually the wrong key because we expect a change, is very unusual. In the recapitulation, where we expect the second theme to remain in the home key of G minor, instead he changes to the dominant minor for the second subject. Of course now be is in the wrong key to end the piece, so he makes up for this with a long coda to reestablish the tonality of G minor. There is a deceptive cadence you might listen for near the end of both the exposition and the recapitulation, which wrenches us out of the current minor key and into a major key built on the sixth scale degree of the previous key, but in both cases by the end of the section we are firmly in G minor again. The deceptive cadence works this way: The primary expected pitches for the expected key (root and third) are present in the violin and the right hand of the piano, but the pianist's left hand and the cellist undermine this with a pitch just one note removed from the expected pitch. This is a pivot point, which I have described in this space before as something not unlike Crazy Eights or Uno, where with one sleight of hand based on a relationship to the previous card/chord a whole new direction is opened by the placement of the new card/chord.

This is, of course, not the place for a full-fledged harmonic analysis-I'll make my students suffer that in the classroom-and I see I spent all my goodwill on that movement so if anyone is still reading I will just sum up the next three in a sentence each. The scherzo is in typical scherzo form, and therefore very unlike the Scherzo that begins this program. The slow (third) movement has the quality of a nocturne, of which Chopin wrote twenty for solo piano. The finale is in rondo form. Chopin used all of the typical forms for the four movements of this work, although as we have seen in atypical ways, and it is worth noting that while he had studied composition he had not studied in the German school at this point in his life. Charles Rosen discovered the same "problem" in an early piano sonata: "The exposition never leaves the tonic. Chopin was only sixteen when he wrote it, but it is not the kind of mistake that Mozart would have made when he was six. They evidently did not have clear ideas about sonatas out there in Warsaw." Chopin has often been criticized in his writing of large scale multi movement works, but no less an authority than Robert Schumann (who, incidentally, also is celebrating his 200th birthday this year) said of this trio, "Is it not infinitely noble, more enthusiastic than the song of any poet, original in detail and in the whole, every note filled with life and music?"

Imagine eighteen years passing during the intermission so we can arrive at the composition of the Cello Sonata in G minor, Op. 65, written in 1846. More than the eighteen years we should consider the fact that Chopin was a teenager when he wrote the trio and only three years from the end of his life when he completed the cello sonata. The first movement is on a massive scale, but formally speaking the mature Chopin here follows the conventions of sonata-allegro structure in a more standard way. Again the scherzo follows, with a soaring central section (trio) in the cello. This time a very short slow movement precedes the finale. I am grateful to my daughter Mairi for rehearsing this with me in advance of Şölen's arrival; she invented a transcription of the cello part for a one-sixteenth size violin which consisted of appropriate rhythms on the E string with intermittent pirouettes.

Chopin came out of nowhere into an early Romantic period where his music was at least as novel as anyone else who was writing at that time. He was encouraged by his countrymen to write Polish opera on nationalistic themes, but he knew what he knew and remained steadfastly a composer of piano music. If you ask twenty opera stars or orchestral musicians to name the twenty most important composers you might not hear Chopin's name in the whole 400, but if you ask five pianists to name five important composers his name will be on every list. It is our job as pianists to be sure his music is still heard, the composer about whom Robert Schumann said on another occasion, "Hats off, gentlemen-a genius!" by Duncan Cumming