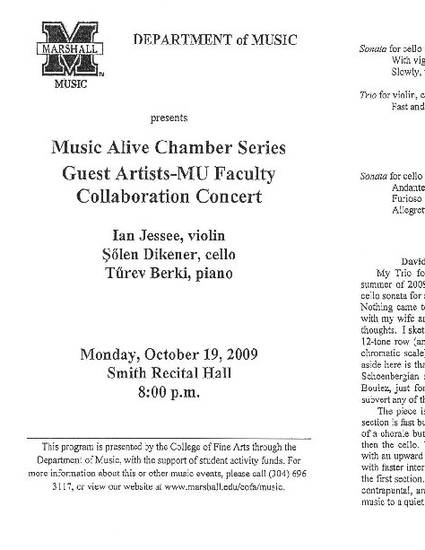 My Trio for Violin, Cello, and Piano was composed in the late summer of 2009. Şőlen Dikener asked me for a work to go with my cello sonata for a concert, so I said yes and immediately went into a stall. Nothing came to me for a few days, until I was sitting in a restaurant with my wife and a sequence of four augmented triads popped into my thoughts. I sketched them down on a placemat, manipulated them into a 12-tone row (and how hard is that, since the four chords complete the chromatic scale), and knew I had something I could work with. (The aside here is that I was never interested in 12-tone rows for any sort of Schoenbergian rigor, Jet alone the dreadful straitjackets of Babbitt or Boulez, just for the chords that popped up and for the ways I could subvert any of the so-called rules.)

The piece is in two large sections played without pause. The first section is fast but with interruptions of slower material that has the nature of a chorale but with cadenza-like material overlaid, first for the violin, then the cello. The chorales lead to a scherzo-like section which ends with an upward flurry of notes in the piano. The second section is slow with faster interruptions that act as developments of the fast music from the first section. The slow material, which is florid, rhythmically elastic, contrapuntal, and melodically chromatic gradually unwinds to bring the music to a quiet close.

My Sonata for Violoncello and Piano was begun in 1993 and tinkered with off and on until 1999. It was composed for my friend Kimberly Graham. The two-movement shape was always deliberate – its fast-slow format fits the somewhat elegiac mood of the piece. I started the piece not long after the death of William Schuman, and some of the musical ideas are a bit of homage. For example, the first movement features a theme that has rapid sixteenth notes often in unison, or at least rhythmic unison, by the cello and piano. Some polychords, a favorite device of Schuman, provide anchors to the opening movement, and the slow movement's harmony has many harmonies based on "triads" with both a major and a minor third.

The first movement is in E and has a sonata shape. The fast melody that opens the piece is paired with a searching melody which serves as a contrast.

The slow movement lets the cello explore its lyrical nature with long melodies that travel around most of the range of the instrument. The harmonies might even suggest an underlying bitterness before turning a bit more sunlit at the close.

Tőrev Berki was born in Ankara, Turkey in 1970. He has begun his piano education at the age of nine at Aran Music Center (AMC) in Ankara. His studies continued between1979-1997 with master duo-pianists Elif and Bedii Aran. Having received numerous awards at AMC, he was sent to Berlin in 1982 by Ministry of Foreign Affairs to represent Turkey at the 29th International Steinway Piano Competition, where he has shown an outstanding performance and awarded with the first prize. In the following year, he was among the five award winners in Italy at Senigallia International Piano Competition for Young Pianists with a remarkable grade.

The music authorities, with the concerts he performed in numerous countries including Germany, Italy, Poland, U.K. and U.S.A. praised Tőrev Berki over the years. Among various memorable recitals, his concert at Sopot Music Festival in Poland in 1990 has a distinctive place, as he was the first young Turkish pianist invited to this prestigious music festival. Later in 1993 having been assigned as the cultural attaché of Turkish Republic in U.S.A., he has given a recital in Washington D.C. with the occasion of70th anniversary of the Republic. As a soloist he has played various concertos as well as many recitals, in international festivals held in Turkey.

While building a distinguishing style of his own, Tőrev Berki diversified his musical competence by completing his education at Gazi University, Department of Music Education as a valedictorian. He gained his PhD degree in music theory in 1997 with his thesis named A Framed Cadenza Model related to Mozart's Piano Concertos. Authorities named his thesis as an innovative scientific study in the field of musical analysis.

As a socially aware artist and fine musician, his contributions to culture and society have been praised on several occasions, highlights include, Turkey's Most Successful Young Person in Culture by the Junior Chamber International and honorary title of Steinway Artist by Steinway and Sons.

In June 200 l Tőrev Berki made his debut at Carnegie Hall in New York.

Prof. Dr. Tőrev Berki is Chairman of Musicology Department, State Conservatory of Hacettepe University. His dedicated work in academic field is a reflection of his view that leads his successful music career, "for supreme music success, talent and knowledge of theory goes hand in hand".

Ian Jessee currently performs with West Virginia symphony Orchestra and teaches string instruments at Charleston public schools. He is on the faculty of Akademi Datca, Turkey. As a conductor, he directs the Cadet Strings at West Virginia Youth Symphony. As a dedicated educator, Mr. Jessee is the president of the West Virginia Federation of Music Clubs at serves at the state board of West Virginia chapter of American String Teachers Association.

Şőlen Dikener teaches at Marshall University since 2002. He is the founder and artistic director of International Summer Music Academy, Akademi Datca in Turkey. He produced his first compact disc in 1998 in the US and since then published two other CDs that are dedicated to the solo cello and chamber music works of modern composers from Turkey. His most recent project involves a cello method book and the performance of the music of regional composers, including his commissioned work, the Piano Trio by D. Williams.